It was raining! Could you believe that? With the rain, came the cold. Really? It was freaking cold this day and the night should become even more biting. I was freezing. My clothes and I did not prepare myself for such weather. Last time I was here in New Orleans, it was hot and the one day with a little bit of rain was around 20 degrees Celsius. Today it went down to 9 degrees. The only long clothes I had were the one which I wore when I left Germany. And it was not enough.

In the morning, I did not so much. Once again, I took a look at my working emails, just in case that anything essential needs to be done, I finished some reports. Afterward, one or two hours of blogging, social media, etc. were on the plan. And then it was time for Wrestlemania! Including the Pre-Show, there were seven hours of Wrestling awaiting me!

As the show started very early and my friends from Rhode Island usually appear for the main show, we just talked about finding a meeting point for after the show. I also told my new Irish friend where to meet, so that we could spend the night together.

Fortunately, they managed to get tickets for seats, which were close to mine, so it was easier for us to meet up afterward.

The show, in general, was good, I looked forward to a few matches, some others I did not like that much. I do not have many things to claim about, except a few results, which were not in line with my wishes. But that is sports entertainment, they always have a bigger picture in their mind, and sometimes in the near or farther future, it might make sense. Therefore, I am happy to attend the biggest show in the Wrestling business for one more year.

After the show, I met the Rhode Island guys, they also had a new friend, for whom it was the very first Mania. Then we picked up the Irish. We walked back to the city center and then our directions were separated. Two of them went back to their hotel because they were a bit drunk and tired already. And the rest of us head towards Bourbon Street. So it comes that a German, an Irish and a US guy spent the night in New Orleans. 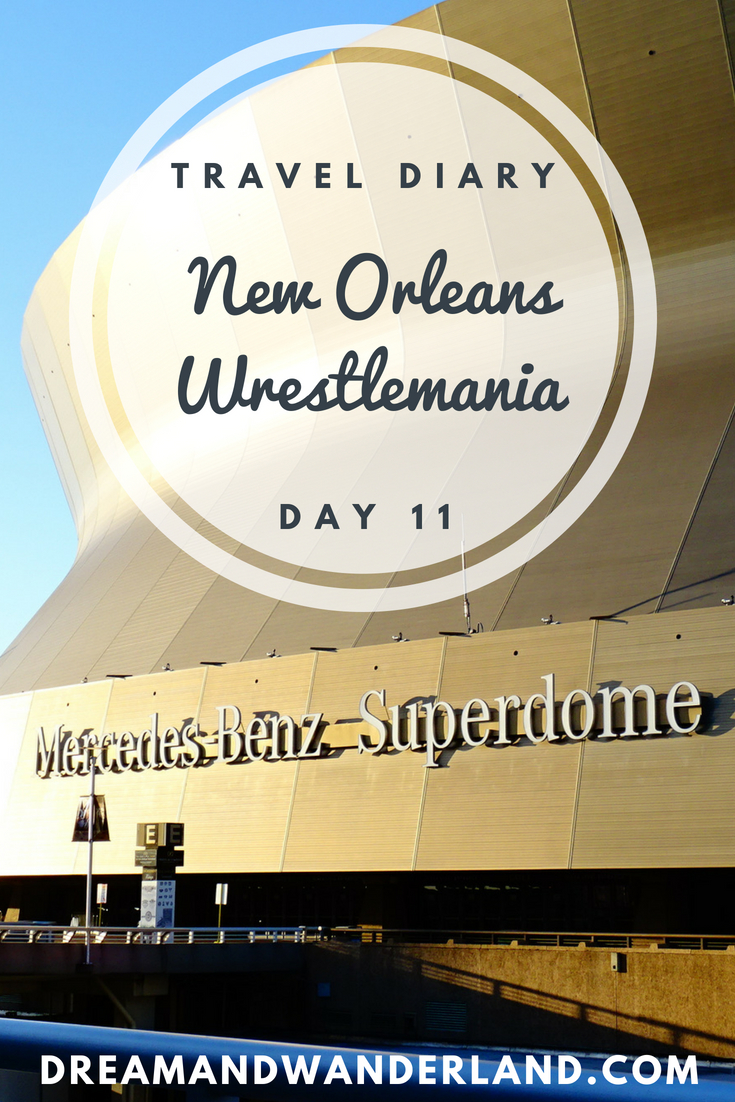 Due to the rain, not many of the people went to the party mile. The most of them, I guess went back to their hotels. No comparison to the last time, when almost 80 000 people “pilgrimage” from the Superdome through the streets and sang all the Wrestling songs and chanted all the Catch Phrases. There was no flooding of the French Quarter of Wrestling fans tonight.

So we were wondering what to do now? We found a beer point, where a cup of beer was 5$ only. Then we went up bourbon street, went into a few bars and listened to some good and some better live music. We met people who were costumed like horses. For a little midnight snack, we went to the Café du Monde and this time was lucky. No queue and a table straight away.

Finally, I got my Beignets. All the times that I tried it before were worth it. They were damn delicious. You have to try it yourself when you visit New Orleans.

Afterward, we went to Frenchman Street. Another but not so popular hotspot as Bourbon Street is. Various bars, restaurants, and Music clubs. The only problem is that they do not let you in with anything to drink which you have not bought at their place. That is a bit uncool and easier at Bourbon street.

Anyway, we finally made it into the Spotted Cat Music Club with a brilliant music jam session. There was also a piano in the women´s restroom. I found it a bit weird, but I could not help myself and had to play a few notes. Not that I am perfect. But just to say; I played the piano in the women´s bathroom. At the end of the night, we went back home, and on the way, we met that crazy little crowd. A guy who offered some jerk chicken fresh from his BBQ, Santa Claus, an in New Orleans living Vietnamese, and a girl who works in a Vampire shop. The jerk chicken was fantastic. So soft, the flesh almost falls from the bone by itself. Such things only happen in New Orleans.