Waking up a bit too early at five something in the morning. Similar to yesterday, my body is not fully accustomised yet to the different timezone. However, I did not manage to get out of my lovely new home for two weeks before half-past eight. Cannot remember what I have done so long.

When I finally get out of the house, the first purpose for today was going to all the places I have been before and said Hi. So I walked down the esplanade avenue. On the right-hand side, you can see already the large skyscraping hotel complexes where I stayed the last time. In front of me the French Quarter.

First, still quiet, then it became slowly busier. I turned right on Decatur St, heading to the Café du Monde hoping to get a table this time. The French Market appeared on the left, which came more and more to life. Some of the shops were still closed; others were open already. I jumped into the one and another and dived into the early morning life of the Quarter. 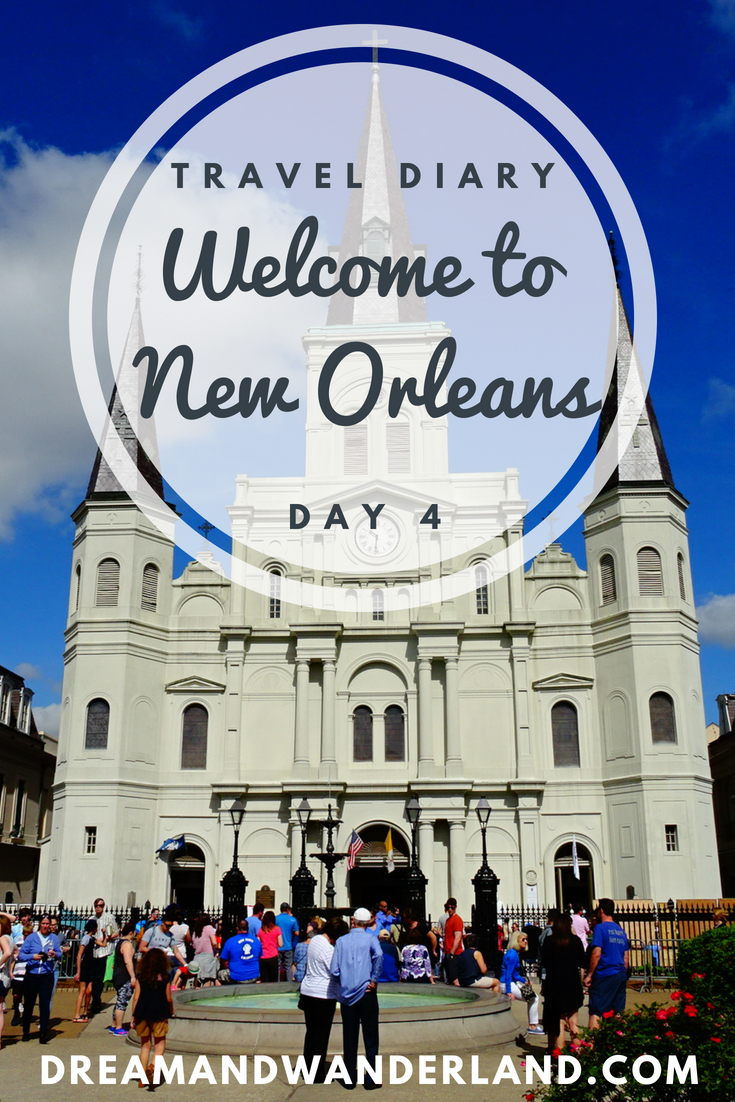 Suddenly, I arrived at the Café du Monde. No success then, nor today! It was barely nine, and the queue was almost a block long. As much as I wanted to eat there at least once, I am not crazy enough to wait in such a line. Maybe I am luckier in the next days, in case I wake up as early as today and use it to leave the house much earlier.

Thanks to Monty’s and its Beignet Fries I got a breakfast anyway. They were delicious, in Germany (Eastern Germany, in particular) we have something similar which we call “Schmalzgebäck.” The taste is pretty close to the one of the Beignets.

Afterward, I continued my „ saying hello“ tour and went across Jackson Square. An Easter Sunday Parade was about to start or end; I didn’t know, I just saw the beautiful, colorful, and elegant ladies in their Easter Sunday dresses with their Easter Baskets.

Leaving Jackson Square, heading to the river. The Mississippi was calling me. And right in time, I was there and my favorite steamboat The Natchez laid in front of me, playing songs on its steampipe organ. Hello Natchez!

Walking alongside the river, I helped an Indian guy with his photos, and we walked a bit together till the Audubon Aquarium. He wanted to visit a few museums. I let him go and went to Poppy’s Crazy Lobster instead.

A lot of memories came back to my mind. It was my first American Bar, my first American beer (an Abita Amber), my first Oysters of my life, the first day I met my friends from Rhode Island, and the beginning of a love affair, which ended up with a broken heart. A lot of „firsts.“ All happened on the first day of my first solo trip in New Orleans four years ago. I came back for a beer, a hurricane or Gator Sausage almost every day. The waiter already knew me when I returned over and over again. Maybe this could happen again.

To revive the good all days, I returned to Poppy’s, I got a Hurricane Category 2, some Oysters and enjoyed the live music. I could swear that it was the same band. 🤔

The good thing about Nola is that it’s allowed to drink in public. Drinks are served in takeaway cups. Good, so I could grab my hurricane and continue my „I am back“ tour.

I checked the area for more signs of the upcoming Wrestling week. And yes, I can confirm, New Orleans is ready for WrestleMania (the real reason why I came back 😉). The convention center is still at its place, so are the Superdome and the Smoothie King Arena. Check out my Facebook Page Wander and Wrestleland for more Wrestling stuff.

There is a Basketball game going tonight, the New Orleans Pelicans vs. Oklahoma City Thunder. I was already in the line for some tickets, as this is still something which is on my list. Unfortunately, my stomach started doing weird things. Since I poisoned myself with a Tuna Tatar in Romania past November, I have problems with my stomach from time to time. Every time is seafood involved on such occasions. Probably I developed a kind of allergy? However, I needed to skip that plan and went home as soon as I could. I came back just in time to turn myself inside out. No more details needed, I guess!

A promising start, and an unlucky ending. Now, a few hours later, my body calms down a bit, and I am almost ready to go out and try to find a kind of supermarket or anything similar. I am running out of water and, just in case, I may need anything to eat for later.

I am afraid that is everything for today. Besides a bit more blogging stuff tonight, I will try to get my stomach feeling better. Hopefully, you had an awesome Easter Sunday! I wish you a great and relaxed Easter Monday!

Do not forget to catch up with the previous days Take off in Düsseldorf, Layover in Dublin, Ireland & A day in New York City!