There is nothing much to say about this travel day. I will go back home to Düsseldorf, and my three-weeks vacation will come to an end.

I woke up, showered, and put the most comfortable clothes for a long flight on. Then I put the rest of my stuff into my bag, grabbed some fruits and a coffee from the breakfast buffet and brought everything to my car. After checking out of the hotel, I drove to the next gas station, fueled the car and headed to the airport, where I dropped off the car and waited for boarding.

After boarding, I met this Irish family. It was like; the kids sit left from me, the parents, on my right side. Weird seat choice! But ok, who knows why they did that! But then they asked if I would like to switch seats so that they are closer together! I tried to pretend that it would not bother me sitting between them but then I agreed, and I got a window seat after all!

Well, this is the story of how I got my window seat, which was perfect, as the view on these reds, and oranges were so stunning. Fall foliage in the US is always worth a journey.

A year ago, I made a road trip through the New England States, and I already fell in love with the Indian Summer. But now the time was a bit more perfect; not too early, and almost too late, just perfect! 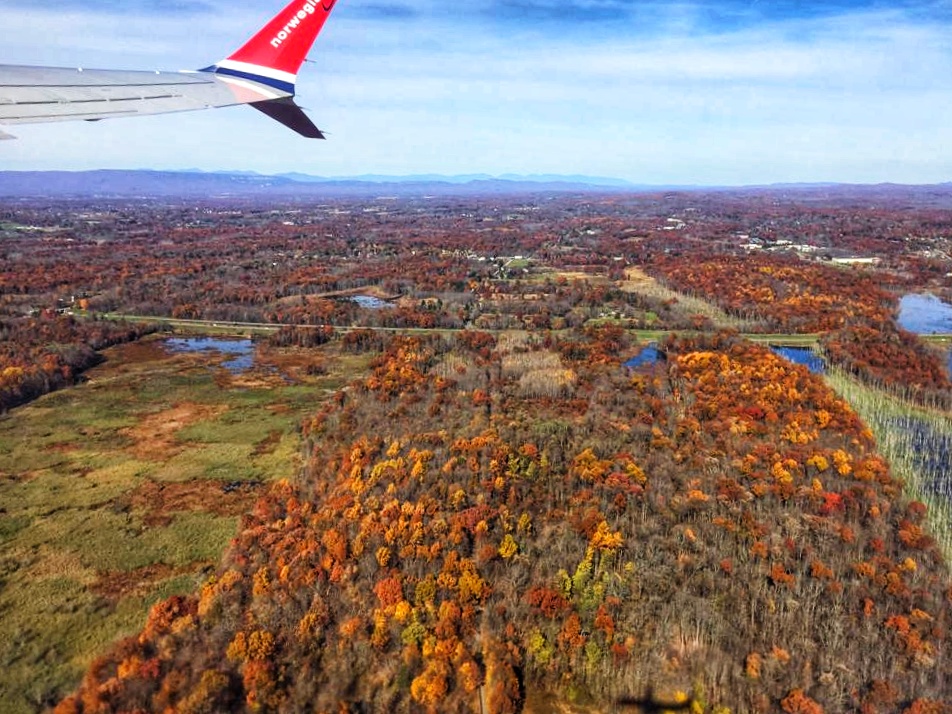 The first hour or so, I talked with the Irish Mom. She told me that they visited their family who lived here. When I said that I would spend the night at the airport in Dublin, she gave me a book which she already finished reading. I was very grateful! Something similar happened in Spring earlier this year. I flew over from New Orleans to Cancun, Mexico, and I met a couple from the US in the plane. I talked to the girl a lot, and when she heard that I travel alone, she gave me her ring, as a “memory of a stranger,” she called this gesture. It was so lovely of her! I still have that ring, and indeed it reminds me of her and the adventures that I had on that journey!

Soon, I fell asleep! I flew with Norwegian Air at the lowest cost level, which means, I had no food, no drinks, and no entertainment, at least, not included. Of course, it was my choice, and I will not complain, especially, because I saved a bunch of money which I could spend for other things and activities, which were more important to me. Nevertheless, I have not had a lot to do. I read all my books, the batteries of my laptop were empty soon, so I had no other chance but sleep. It was not a bad idea at all. The flight would land in Dublin, Ireland, and the connecting flight would depart six hours later in the morning of the next day. And I did not know if I could sleep at the airport somehow.

Arrived in Dublin. First, I got myself something to eat. Fortunately, there is a cafeteria, which is open 24 hours. Next, I tried to find a seating place with a power connection nearby to recharge all of my batteries. Laptop, phone, everything! I found a place where I could spend the rest of the night. I settled down for tonight and started to use the upcoming hours for doing some writings, social media posting, and more! A few things, which I did not take care during my vacation.

Soon more and more people came around from their landings, and they also waited for their connections flights the next morning. Fascinating which kind of people choose to stay at the airport instead of getting themselves a hotel room.

MORE ADVENTURES FROM DREAM AND WANDERLAND  Ireland: How To Get From The Dublin Airport To The City Center

For the next hours, I did some work, tried to sleep and prepare myself for the morning flight and the fact that I would go straight to the office, as soon as I would land in Düsseldorf. I did not want to lose another vacation day for unpacking or washing my clothes. And it helps to stay awake and minimize the risk of severe jetlag when I would fall asleep during the daytime. That is a tip from my side.

If you travel from one timezone to another, the best thing to do, to avoid jetlag, is to stay awake and go to sleep with the regular time at your location. Do you have special tricks to avoid jetlag? Or any ideas to spend a long time at an airport? Leave me a comment below this article!