New England: Fascinating Route To The Best Lighthouses In Maine

Are you obsessed with lighthouses? I do! Yes, that is right! I have a lighthouse obsession! Every time, when I see one I need to visit it. I love to climb up, learn about the history, and enjoy the views from the very top of the lighthouses. They always give me a weird feeling, a mixture of adventure, home, magic! I barely can describe it! During my road trip through New England, my journey also leads me to the “Lighthouse State” Maine. Because of that, I would like to present you a fascinating route to the best lighthouses in Maine. 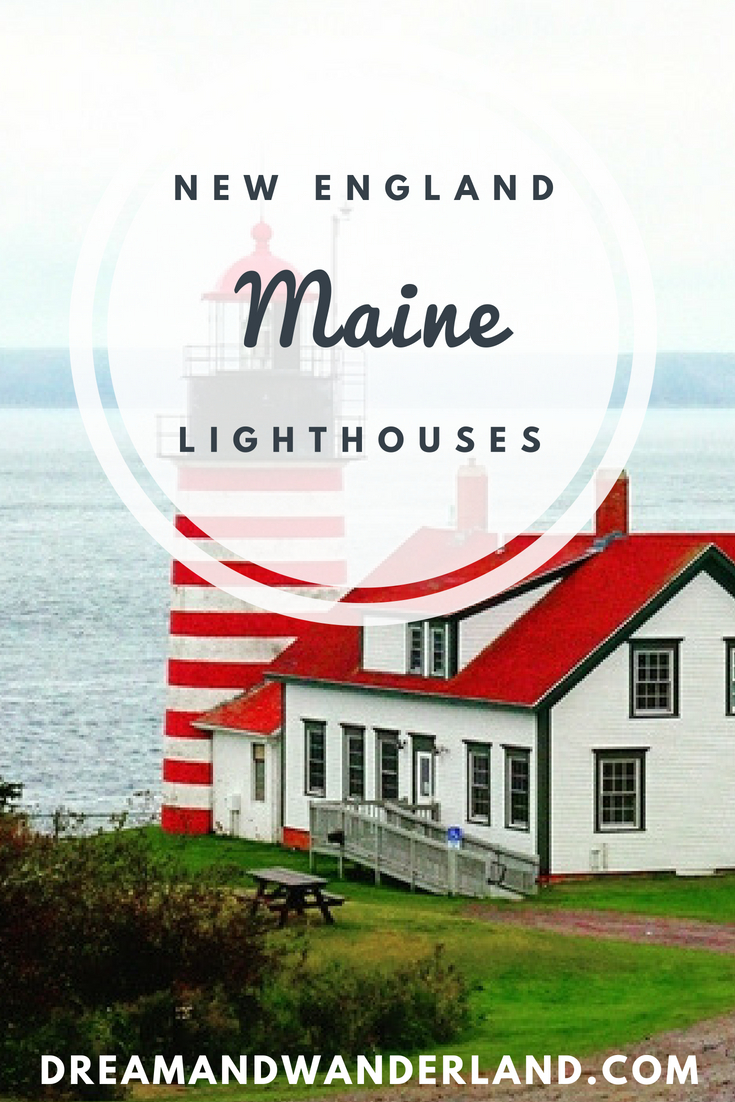 The Best Lighthouses In Maine

As Maine is the most eastern state of the US, a lighthouse is usually the first what sailors and seamen see when they sail to the United States. The best way to explore Maine is to follow the coastline. Automatically, you will come across the most important locations and lighthouses.

Alongside Maine´s coast, there are still approx 65 lighthouses, and each of them has to tell at least one story. Around Portland, which is the biggest city in Maine, and with its shops, restaurant, and food scene, it is indeed worth a longer visit; you can find at least six lighthouses.

The list below shows an order from west to east. I believe you usually will enter Maine from Massachusetts or New Hampshire on the west. If you enter from Canada on the east side, then feel free to turn the list upside down and start with my personal favorite; West Quoddy Head Light.

MORE ADVENTURES FROM DREAM AND WANDERLAND  New England: 11 Fun Things To Do In New Hampshire

Begin your journey with the Two Lights at Cape Elizabeth a bit south of Portland. The Two Lights State Park is a wonderfully protected nature reserve with a bunch of trails and a lot of opportunities for having a picnic. Nevertheless, when you enter the park, you will not see any lighthouse immediately. Instead, you will need to follow the street for a while. This area is a fantastic place for a walk at the beach, scuba diving, fishing, or relaxing and watch the ocean, and the waves. For me, it is almost like meditation to look at the sea.

But where are the lighthouses? Both of the towers are privately owned and not open to the public. Anyhow, they provide a beautiful motif for a picture or photo. The first of the two lighthouses which you can see overlooking the bay was built in 1879 and is about 17 meters high. Once, Edward Hopper painted it in 1929, and today the painting is displayed in the Metropolitan Museum of Art in New York City. 1970 the lighthouse was also the motif for a stamp.

Also at Cape Elizabeth, but closer to Portland, you can visit the oldest lighthouse of the state. Portland Head Light has been leading the ships at Portland´s Harbor since 1791. The light of this 24-meter high tower is visible from a 44-kilometer distance on the sea. 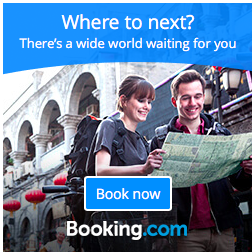 The best photo opportunities are from the nearby Fort Williams Park, an old military area. 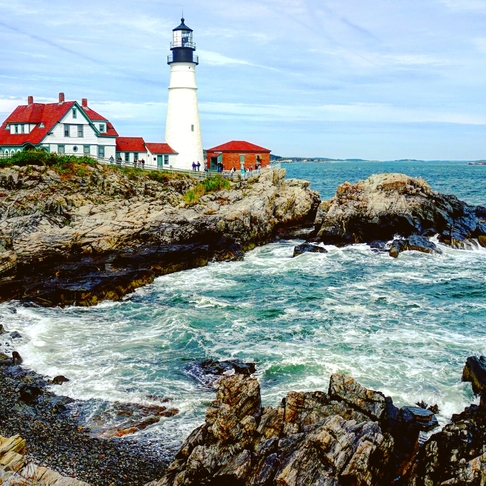 The Pemaquid Point Light is with about 30 000 visitors per year one of the most visited lighthouses in the state, and probably of the US, too.

At least, this one made it onto the quarter dollar in the 2003 series of unique places in the States. When it was Maine´s turn, the lighthouse at Pemaquid Point was minted on the back.

A 90 minutes car ride from Portland, in my opinion, this is a fascinating scenery. The wild ocean, the rough and cliffs, which falls into the sea with its weird lines and seawater pools, formed by the tides. When I think about Maine, I usually have this picture in my mind; this is the epitome of Maine. 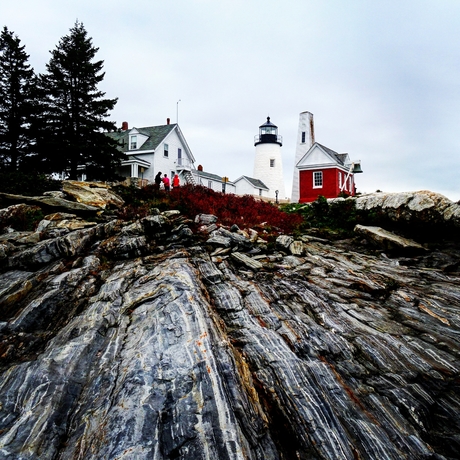 Here we have the film star under the lighthouses. The next time when you watch “Forest Gump,” pay attention where Tom Hanks concluded his journey from one coast to the other. You may recognize this 7 meter “high” tower at the end of a 30-meter long wooden walkway.

The Lighthouse lays about 30 minutes car ride from Rockland and marks the east entrance of the fishing village, Port Clyde. The streets are small, which is maybe the reason because it is not as crowded as at other lighthouses. In case you come around anyways, the little museum is usually open in the afternoon between 12 p.m. and 4 p.m. 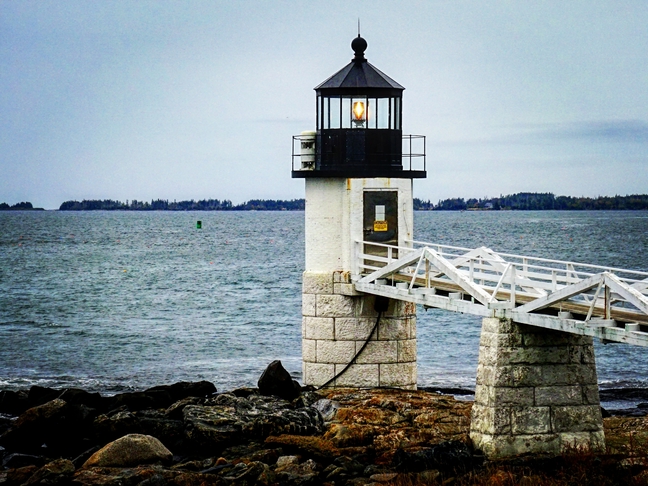 Further, on the way to Rockland, the Owls Head State Park hides a little gem; the Owls Head Lighthouse. Atop of a 30-meter high bluff, the light sits majestically overlooking the ocean and the many buoys of the fishermen, who catch lobster in the Penobscot Bay, not far away from Rockland Harbor.

Inside the tower, you can see the crown jewel, the fourth-order Fresnel lens, which is over 160 years old and is still operating. From here you can enjoy the view of the bay, islands, and marine traffic. But check visitors times beforehand, as the lighthouse is not open to the public each day. 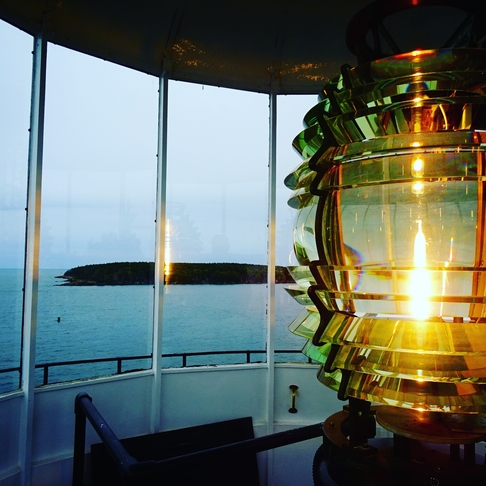 As the name already tells you, the Rockland Breakwater Lighthouse sits at the end of a 1,4-kilometer long walkable breakwater in Rockland. Since 1902 it leads boats and ships a secure way into the harbor.

To walk out to the sea along the breakwater is not without any risk. But with proper shoes and paying attention to where you put your feet, it can be a great walk. Be carefully on rainy days, as the granite can be slippery, and sometimes lightning hit the breakwater.

MORE ADVENTURES FROM DREAM AND WANDERLAND  New England: 14 Unique Places And Things To Do In Massachusetts

A visit to the lighthouse and its attached keeper´s house depends on weather conditions and a tour of the property on the availability of volunteers. But if you visit and have the chance to climb up to the top, you will be rewarded with a stunning view of the Rockland harbor, with all its marine traffic, lobster boats, and schooners. 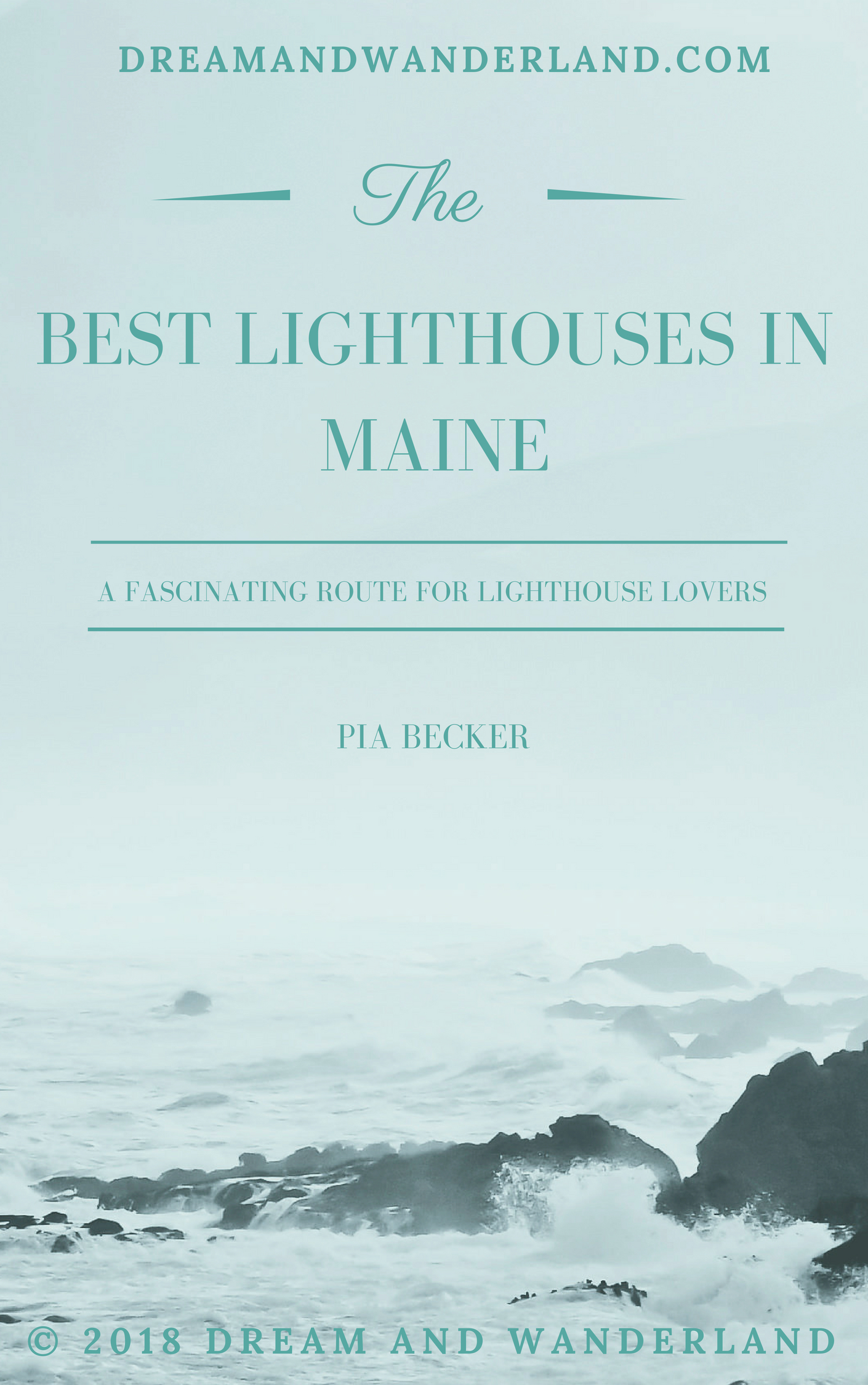 As mentioned in the beginning, West Quoddy Head Light is my favorite of the lighthouses in Maine. And you have one chance to guess why! One hint: I am a girl!

It is my favorite lighthouse because of these bright white and red stripes! Does it sound crazy! Well, sometimes I am!

Anyway, this lighthouse is the easternmost one in Maine and the United States in general. More East and you are in Canada already! That would be the end or the beginning of a tour visiting the lighthouses in Maine. In my case, a few years ago, it was the last stop before crossing borders to Canada.

The visitor center is open the entire summer, where you can learn a lot about the history of lighthouses at Quoddy Head Park and buy some artwork from local artists. The state park is also open for visitors. From here you can spot the very first rays of the sunrise of the whole nation. 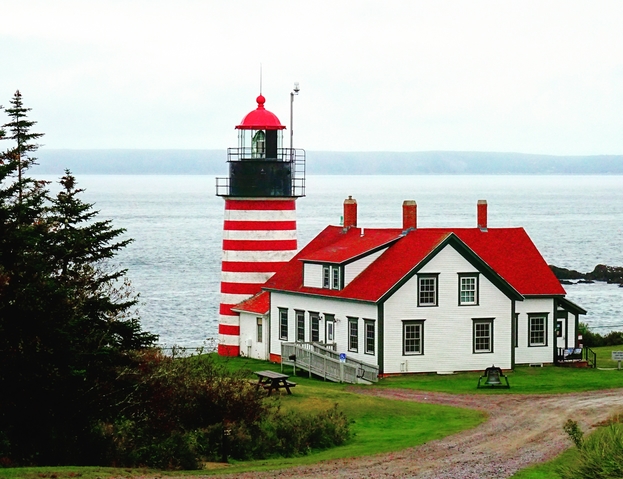 The first tower was built in 1808, but the one you see today has been standing here since 1858. Wander around on one of the many hiking and nature walks, or climb down the coastal trail and visit the rocky beach. Sometimes you can spot a whale or two swimming by. Last but not least, you will have some breathtaking views to the Quoddy Narrows and can watch the biggest tides in the country.

You might wonder why it is called West Quoddy Head when it is at the most eastern point of the US. Where the heck is East Quoddy Head? Well, it sits on the Canadian sight, at Campobello Island, New Brunswick. Just on the other side, east of Maine.

MORE ADVENTURES FROM DREAM AND WANDERLAND  Indian Summer: How To Enjoy New England And Eastern Canada

I love this lighthouse, not only because of its distinctive stripes but because of the feeling of visiting the end of the world. A certain sense of being alone in this region, and the feeling of realizing how small we and our problems are in comparison to the greatness of this earth. 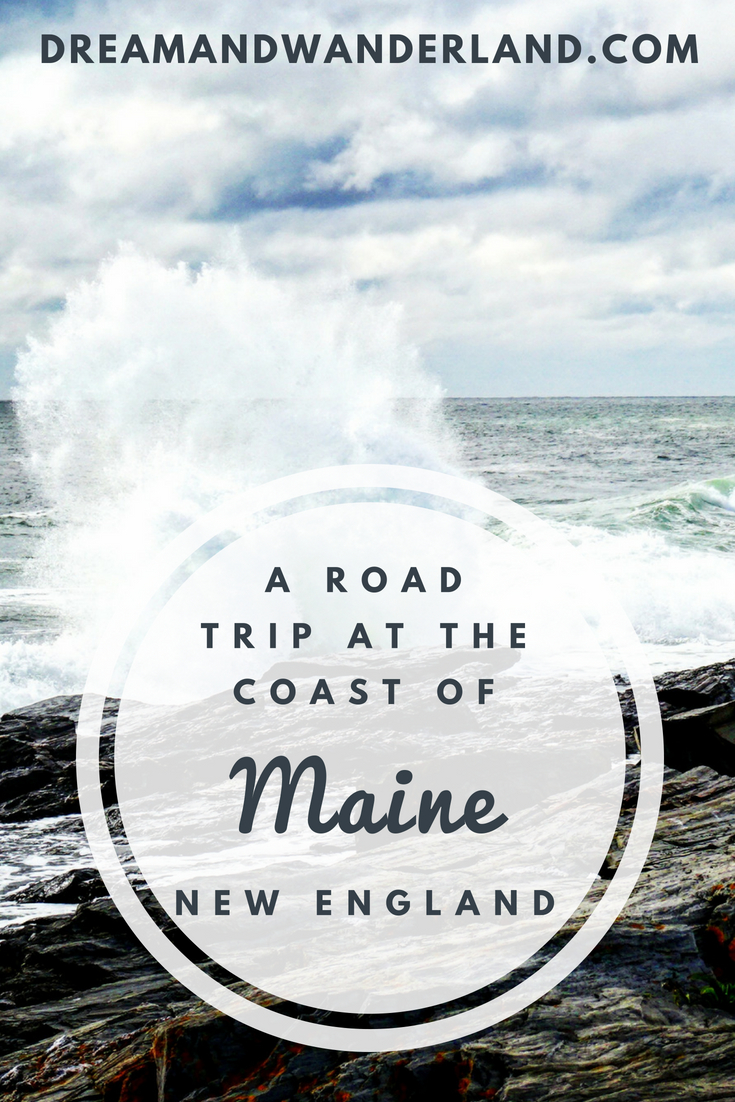 With the West Quoddy Head Light, we finished our little tour to the lighthouses in Maine. You still do not have enough of them? If you are looking for more gorgeous, weird, or funny beams, no worries, there are more of them. Alongside the coast of Maine, you will find more unique lights, as like Bass Harbor Head Light at Mount Desert Island, which is part of the Acadia National Park, or the Cape Neddick Head Lighthouse, which is also called “Nubble Light” and is another one of the most photographed lighthouses in Maine. Do you have heard about Monhegan Head Light or Whaleback Lighthouse?

Maine is indeed a paradise for lighthouse lovers! As Kenneth N. Black once said; “Lighthouses are like people, they come in many different sizes, shapes, and colors.”

37 thoughts on “New England: Fascinating Route To The Best Lighthouses In Maine”