After a stressful day driving from Cayo Santa Maria to Varadero I woke up in a hotel which needs a complete makeover. A hotel which is not acceptable in any way. The night was a nightmare, having a shower was not possible, at least, not if you are a fan of hot water. I could barely wash my hair as the only water which was available was the cold one.

The first thing for today which I had to do was getting another room. The one, where I spent the night in, was a danger to my health. As soon as the air condition was switched off, it started to smell very weird as if the mold was everywhere already. No hot water and damn loud noise during night time. Dirty sheets and towels, I could not stay there.

Usually, I do not expect a lot, but one thing is essential, and that is cleanliness. It must be clean. And it was not.

I was disappointed yesterday evening when I saw it the first time. But too tired to do anything about it. But today, I was not only disappointed but also mad about the whole situation. I came here to enjoy the final days of an incredible vacation, and they try to ruin it.

So said, so done! I went to the reception and explained them the situation and told them, that I need a different room. The good thing was, they confirmed that I get a new room without any discussions. It seems the already had such situations. At noon, I got my new room. It was not better, but at least the bad smell was not existing here. It was still not acceptable in a way that they pretend to be a five-star hotel. That was even for Cuban categories, not better than two stars.

Anyway, after I moved to the other room, I felt a bit better. My friends, who I met a couple of days ago in Playa Larga, helped me and gave me some moral support. Afterward, we went a short way into the town and arrived a souvenir market. All kinds of Cuban goods which you can buy to have some memories of your stay. From leather to homemade dishes, to art pieces. There was a lot of stuff.

It was nice to see all that stuff but to be honest, I am not into buying souvenirs. They usually stay in a rag at home and catches dust. I am a fan of real memories, like this new friendship with the two guys, or photographs, or written pieces like this travel diary. I love to keep such memories alive by the document as much as possible. In infrequent occasions I also buy something, but then it is a piece which I love, which I can use somehow. For example, I have a few pieces of clothes bought during my previous vacation, and I still wear and love them. My closet at home is almost as international as my travels are. 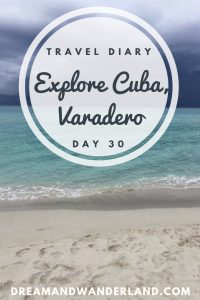 When we had enough, we slowly returned to the hotel. I tried to relax at the pool, and they had a sports session in the hotel gym. Even this one was dangerous to use, they told me later.

It became a grim sense of humor when we talked about the things which are not right at this hotel.

We met again for dinner. At least the food was not that bad. Then we watched the show. Yes, the hotel had its entertainment program. The one evening they had a dance show, the other one a Mexican mariachi show, the next evening a hip-hop show.

The girl was talking to another guy, who they met the other day. They spoke about dancing Salsa. She was crazy for it anyway, and he came to Cuba to learn it. He also told us about a Club in Varadero. Calle 62, where all the people come to dance and drink and having fun. The most famous club in Varadero these days.

Do not stress yourself out, by forgetting about your Visa. Order your Cuban Tourist Card right here!

Together with him we went there and danced the whole night. We even danced in the rain, and I danced Salsa as well. My Salsa lessons in Havana and Trinidad paid off tonight. It was amazing. With Salsa in my ears, we called it a night and went to bed.