I woke up in my awesome room at the Casa of Alexis & Dignora in Playa Larga at the Bay of Pigs. A renovated and modernized hostel with such high standard a hotel could get some ideas from how to do it right. I had breakfast together with my new friends from Düsseldorf, who I met here yesterday.

They thought about renting bikes but had not decided where to go first. And I? Before I left this beautiful place, I wanted to see a bit of the area around it. The Zapata National Park was close and a few beaches, snorkel and diving areas as well.

So we talked about the different options and our host Alexis was a great help with his ideas and recommendations.

In the end, I offered them a ride, and we three went to the Officina for the Parque Nacional Cienaga de Zapata. We had three options:

Unfortunately, the season is usually over in March and the possibility to see some are not that high. Maybe you see some, maybe not.

All three of us were not that interested in birds in general, besides the Flamingos and their colors. 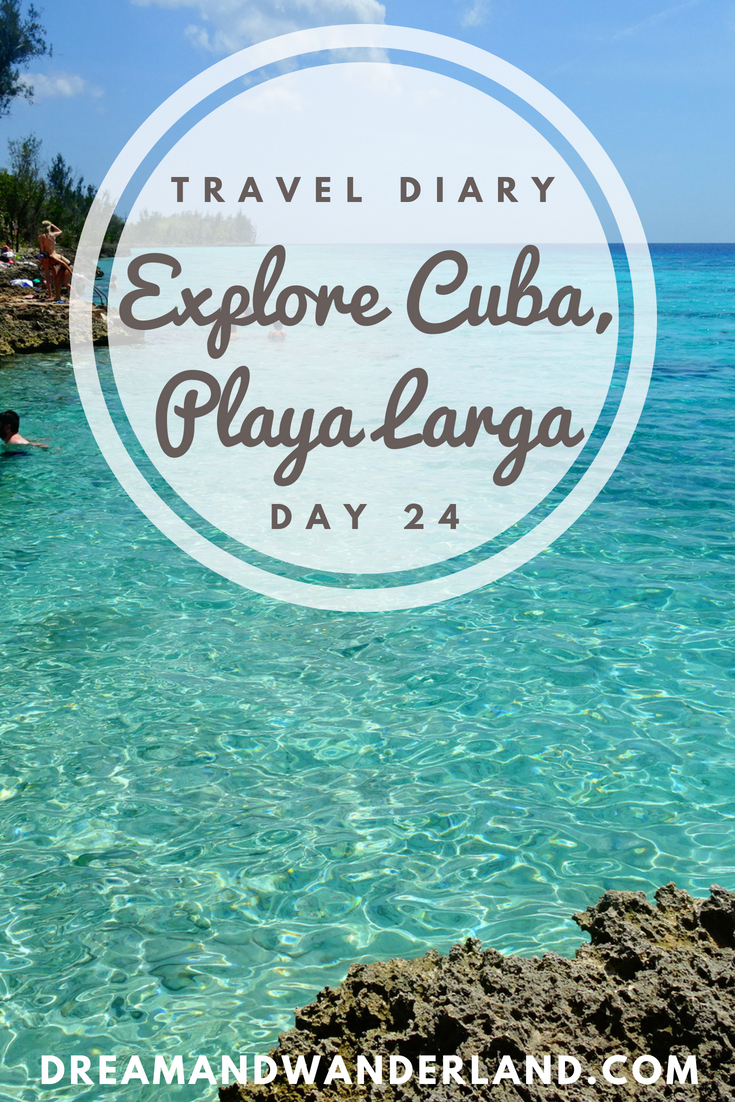 This tour was our choice eventually. It goes through the forest to two different natural cave or cenotes as they called in Mexico. On the way through the “jungle,” at least it felt like that, we saw some crocodiles and other animals. The caves were incredibly beautiful. In the second one it was possible to swim, and this time, different to the one in Chichen Itza, I swam as well. It was a welcome refreshing after the hike through the heat. The water was clear, fresh, and had the right temperature, not too cold, but cold enough to cool down a little bit.

Get your Cuban Tourist Card straight to your home and be prepared before you head to the airport!

After our little cave and jungle tour, I dropped off all of them back in Playa Larga and started my way to Trinidad. On that way, I stopped a few times at the beaches, to enjoy this crystal, turquoise, and dark blues of the ocean. Seldom, I saw so many different shades of blue at the same time.

Later, I passed Cienfuegos. I drove through the city and wondered about the buildings there. I was looking for a gas station, as I was running out of fuel slowly, and would not have made it to Trinidad that way.

When I left Cienfuegos, I had a few small difficulties to stay on the right track. That way I found further nice beaches and a lighthouse. I was not so sad about that. But I also saw the time. It was already 5 p.m., and I had at least an hour of driving to go.

Finally, I made it to Trinidad safe and sound. I needed to ask a few times until I found the hotel. Still, I find it very difficult to find several places without GPS or a road map of the cities.

One more bad surprise at the end of the day. The hotel Las Cuevas did not find my reservation. I booked it on Friday morning via Expedia and had my confirmation email etc. But the hotel still did not see the booking. As today is Saturday and the boss does not work on weekends. I have to come back on Monday hoping that they will find something or call Expedia and clear this. Otherwise, I have to pay the room in cash, which means that I have to pay it twice.

That is anything but not a sweet ending of such a fantastic day. Looking forward to tomorrow, when I can start exploring Trinidad!