The final chapter begins today. I will leave Cayo Santa Maria and go to the final destination; Varadero. My expectations are high, as anyone I asked so far, told me that it is beautiful, and the beaches are fabulous. It is hard to believe that anything can be better than the beach here on Santa Maria.

Well, the last breakfast with a view over the ocean and the beach. One last chat with my new Canadian friend and then I was ready to leave. I wanted to start as early as possible because it will be a five or six hours drive to Varadero.

Around noon, my bag was packed, my emails checked, my mobile phone prepared for the route today’s journey. Hopefully, this will work out for me, a “horror” journey like the one part of the way from Trinidad to here, is the last I want for today.

I checked out and headed to Varadero. The route should lead me through the middle of the country, through small villages and again on streets with everything you can imagine on it. Cows again, the goats were new this time, bicycles, carriages, etc.

Fortunately, my mobile was able to show me where I am on this little map, which I loaded in the hotel. Otherwise, I believe, I would have got lost. There were no signs at all. Whenever I entered another town, I could guess if it is the right town. Which was weird and scared me a lot was the fact that even if I was driving on the same street, the main road usually, I always made it miss the little blue line on my mobile phone GPS. It was hard to find my way back to it.

Suddenly, there was a street sign. It says that Varadero is about 156 kilometers away. Puh, was I relieved. It was the urgently needed proof that I was indeed on the right track.

Unfortunately, this was the last time that I saw another street sign again. The rest of the drive was still a lot of guessing and a little bit of luck.

According to google maps, which was only working because I prepared it before I started driving, while I was in the internet zone, it was only 50 kilometers to Varadero. I was already five hours on the road and the only thing I wanted at that time was to arrive at the hotel safe and sound. Driving in Cuba is a whole different level. It is exhausting. But what happened in those final minutes?

The end of the world, a Noachian-like flood, it started raining. I wanted to reach Varadero before the rain becomes stronger. But it was already that worse that I could not drive on the streets. In the next town, the water was so high on the roads that my car was almost under water. At least, it felt like that. Panic came up, and I was so scared that the engine of my car would give up because of all the water. I was standing in the middle of the street and did not know if I should go forward, or I should turn around.

Do not stress yourself out, by forgetting about your Visa. Order your Cuban Tourist Card right here!

I saw other cars passing me or driving in the other direction, but all of them made it through the deep water on the streets. So, I thought, that I should try it, too. It was like those scenes on TV when they show pictures from cars dying in the water and cars washed away from the streets by those massive floods.

The rain became even stronger, but anyhow, I made it out of the town, me and my car still alive. I was only hoping that it will not die before I arrived in Varadero. Soon the rain was so heavy that I could not see anything. I tried to stop at the side of the street hoping that following vehicles would not oversee me. I stayed there in the middle of nowhere and waited. Waited that the rain is over and I can continue. It felt like the storm was right above me, the lightning was damn near, and the thunder was only one second after the flash.

It took about an hour or so when the rain began to get less. I started the engine and was happy that it still worked. My only wish was to leave this area as fast as possible and leave the rain behind me. Unfortunately, it seemed that it went in the same direction as I did. The following towns were not better than the ones behind me. The streets fall in a way that the water summoned, and all the cars had difficulties going through there.

After another hour, I finally entered Varadero. I found my hotel soon and was pretty happy that I made it. When I checked in, and I was on my way to the room, I met my new friends. I met them the first time in Playa Larga about a week ago, and another time in Trinidad. They booked their room in the same hotel as I did, coincidently. They just returned from a tour to the town. I was happy to see them. 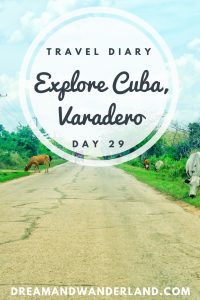 We agreed on meeting up at 7 p.m. to go to dinner together. They needed to tell me more about the other days they spent in Trinidad, and I wanted to talk about the time in Cayo Santa Maria.

What I have not mentioned yet; the first impression of the hotel was anything than euphoric. I mean, yes, I was happy that I found it, that I arrived after that trip from hell, but I expected a bit more. The lobby area looked like a hotel that was built at the beginning of the 20th century and never was renovated. After the Grand Memories in Santa Maria, I maybe was a little bit blessed and spoiled. But this here is anything but not as I hoped for. The first thought I had was; “damn, I should have stayed a few more days in Santa Maria.”

The room was not better. It was the opposite; my first reaction was to turn around and leave the whole area immediately. But I was too tired, and instead of leaving, I stayed for this night.

I wanted to leave, but on the one side, I was too tired, and it was already late for looking for anything else. On the other hand, it was only for three days, and I could survive it. But to be honest, I this should have been my base for the next two weeks, I would have left immediately.

However, tonight I met my new friends again, and we made the best of our situation. By the way, they had the same thoughts and feelings about this hotel. They also had similar experiences with their room.

I will keep away the details of what my night in that room was. Hopefully, I will get a better one tomorrow.

Just one tip from my side. If you decide to go to Varadero, if you want to go there, then make sure to book a room in one of the more expensive hotels. They also have a Grand Memories here. Take this one; I have excellent experiences with this hotel chain.