Part one of this Romania trip was about Bucharest. It was my special wish for my birthday that my best friend accompanies me on one of my trips. That is why, at this occasion, I am not traveling by myself as usual, but do a girls vacation, just my friend and I. So we flew into Bucharest and stayed there for the one day, where we discovered the city a bit. Afterward, we headed to the Carpathian Mountains for visiting Brasov [Bra’ shov]. We chose Brasov for our base for this vacation as it is located in the middle of the region of Transylvania and you can reach every other city and point of interest within a day trip. I also am a huge fan of Vampires and Dracula and as Transylvania is the home of Dracula you have one chance to guess why I wanted to go to this area!

MORE ADVENTURES FROM DREAM AND WANDERLAND  Romania: Five Fascinating Things To Do In Bucharest

How to get to Brasov from Bucharest?

There are six ways to go to Brasov. From Bucharest, you can go by train, taxi, bus or by car. The most convenient way for us was going by car. It is the most independent way of traveling as you do not need to make yourself dependent on any timetables or taxi drivers. And I love to drive. As I do not own a car, I take any possible chance to take a ride. So we rent a car at the airport, drove through the city, and the entered the motorway heading to the mountains.

Click on the image below to book your room in Brasov right away!

How long does it take to get to Brasov?

From the airport in Bucharest, it is about a two and a half hour car ride, so it is from each of the Romanian airports. At least, usually, when there is no rush hour or travel day of all the other tourists.

Instead, it took us twice as long. The first part of that journey was not oo bad. Driving on the motorway was pretty relaxing. The speed limit is 130 km/h, the condition of the road is pretty good, and only a few other cars were around.

Welcome to the Carpathian Mountains!

The hard part began as soon as we reached the Carpathian Mountains. The road got smaller and ended up in narrow serpentines. As it was Sunday already, all the weekend or vacation travelers were on their way back home. The traffic got thicker and thicker; suddenly we ended up in a massive traffic jam. We drove through small and large cities, which were popular as tourist locations for Romanians and foreigners. Like Sinai, Busteni, or Predeal, to name a few of them. That part of the journey was a mixture of traffic jams, slow driving due to narrow roads and steep ends aside of the drives, and snaking through the mountains. 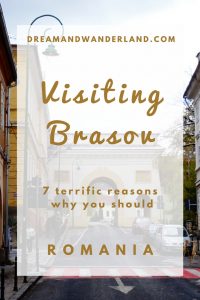 Finally, we arrived at our hotel in the late afternoon. Poiana Brasov in particular, about half an hour outside of Brasov. It is famous for all kind of winter sports like skiing, snowboarding, etc. and one of the most popular Romanian tourist area. Depending on what you plan for your vacation, check beforehand what you want to do. We went there at the beginning of November when the high season was already over. As we both are not so into winter sports, it would have been a better choice if we had taken an accommodation somewhere near the historic old town of Brasov. 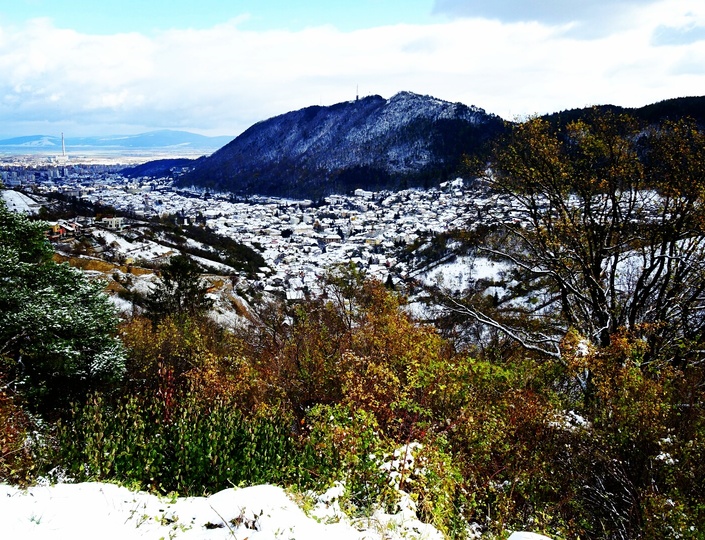 Meaning of Brasov in the past

The city links trade routes of the Ottoman Empire and western Europe. This circumstance and specific tax exemptions, allowed Saxon merchants to gain wealth and establish strong political influence in this area. You can still recognize that influence in the German name Kronstadt. Also, the Latin name, Corona, means Crown City. Brasov is known for its medieval Saxon walls and bastions, the towering Gothic-style Black Church and lively cafes. The Piaţa Sfatului (Council Square) lay in the cobbled old town and is surrounded by colorful baroque buildings.

It is the home of one of the seven walled citadels build by the Saxons of Transylvania. In German, they are known as the Siebenbürgen. You can find the other citadels in Bistrita (Bistritz), Cluj (Klausenburg), Medias (Mediasch), Sebes(Mühlbach), Sibiu (Hermannstadt), Sighisoara (Schässburg).

How to explore Brasov

As often in life, there are at least two choices. So you have two options visiting Brasov as well. By night, or by day, or both. The most interesting and worth to visit part is the historic old town. Outside of it, the not so lovely looking areas begin, which is good for keeping in mind that Romania is still a developing country in comparison to western EU states. Huge, grey, apartment houses look at you with a blank face, and you only have the wish to not being here. The total contrast, when you enter the city center with the cobbled stone of the old town and colorful buildings. We loved it to be here, and explore this small piece of history, with the historical and narrow streets and alleys.

Get your guide to Romania´s best attractions! 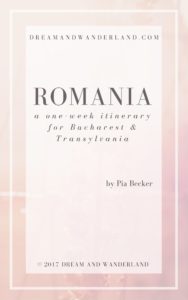 Free walking tour or walk by yourself? That is the question. Everywhere you can get maps of the free walking tour. You can try to catch the guide or walk the route by yourself. The advantage of having a guide is, of course, all the knowledge of him or her about the history and anecdotes of the places. But mainly, in low season, it is a bit hard to find one. There is a meeting point where you can meet up the guide at a specific time. We tried it, but we were not lucky and probably missed the beginning of the tour or the guide did not appear at all. No worries, guys, we did the tour ourselves. We followed the route, and it was so much fun to discover the exciting and historical attractions like the black church or the white tower. The whole tour takes approximately three hours.

Come with me on tour through Brasov. Highlights of the tour are:

The German community in Brasov started to build the church in the late 14th century. It is the central Gothic style monument in the country. The Black church is also known as the most significant Lutheran places of worship in the region and is one of the most important ones. From here you can quickly reach the rest of the old town.

You can find the Council Square in the city center next to the Black Church. It received the right to hold markets in 1520 but has been hosted annual fairs since 1364. It is surrounded by medieval buildings in different architectural styles and the charming pedestrian-only Republicii street. 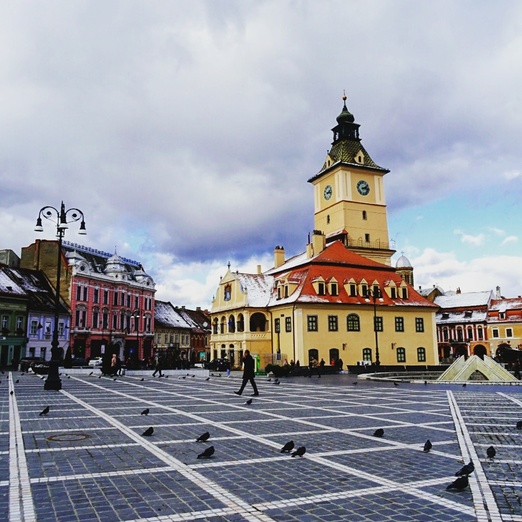 In Brasov, you can find one of the narrowest streets in Europe. The Rope Street or Strada Sforii in Romanian. Its width varies between 111 and 135 centimeters, and it is about 80 meters long. It was an access point for firefighters. Today it is one of the most popular tourist attractions and the meeting point of the town. It is for sure a must do while visiting Brasov. 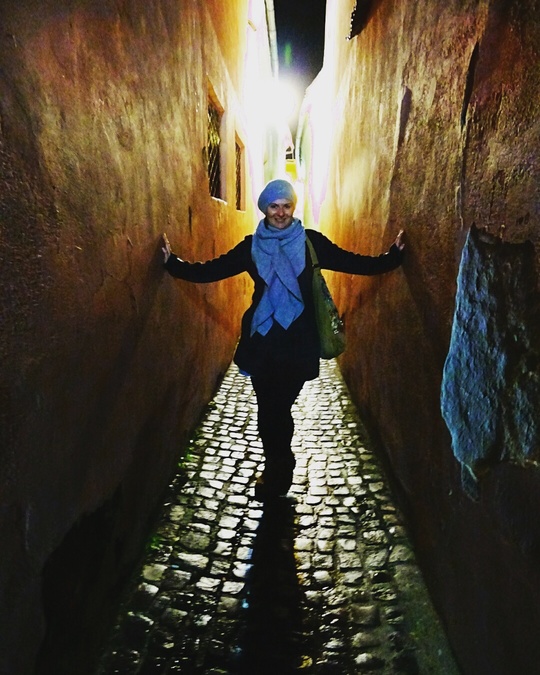 The Romanian Orthodox church dominates the historic district of Schei. Founded in 1292, it was replaced by the church built in stone in 1495, with the support of Vlad Calugarul, who is the half-brother of Vlad III. (also known as Vlad the Impaler, or Dracula). The Orthodox Church and the school, which is located nearby, were the main intellectual and cultural support of the Romanians. Another restoration, which took place in the 18th century, changed the original Gothic face of the church and gave the building a Baroque styled look. The frescos, which were made then were preserved and can be visited today.

You can explore the fortifications of the town of Brasov entirely. The surviving walls in the east and the west of the historic center are well-preserved. The walls in the north and the south were destroyed. The Transylvanian Saxons build those walls to save the city from invasions of Mongols and Turks. The construction works lasted between 1400 and 1650. They raised the outer and inner walls together with massive defensive towers and gates.

The Schei Quarter is the old Romanian district of Brasov, with narrow cobblestone streets and red-tiled building from the 17th century. The only access from and to the Schei Quarter for the Romanians in former times was the Schei Gate. It was not allowed for the Romanians to use the other four entrances. During the Saxonian period between the 13th and 17th century, it was also forbidden that Romanians own property inside the walls, that is why they settled outside of the wall. St. Nicholas Church and the first Romanian school are located in the Schei Quarter.

In 1559 the Tailor´Guild built the Ecaterina´s Gate. They built it for defensive purposes at the same place where a flood destroyed another gate in 1526. The name comes from the St. Catherine´s Monastery which was situated here. It is the only city gate which survived from medieval times 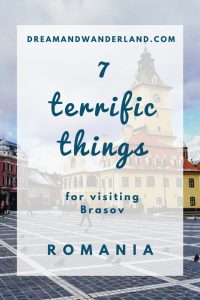 The reason, why I am mentioning the nighttime, in particular, is because it is such a special atmosphere at night. The old town gets a deep and warm light, which gives you a feeling as if there is magic in the air. When we visited Brasov, it was early November, low season and the first snow fell over the city. This mixture made the experience extraordinary. Magic and a bit of a time leap, back to past times. It almost feels as if Vlad III. Dracula himself suddenly appears behind you.

The several stops from above are the same as at nighttime. The atmospheric light of the street lanterns give the city an enchanting touch, and all the sights look different in this light. The cobbled streets glow when the rain or snow falls on it and get them wet.

You do not need to follow the walking necessarily, rather than strolling through the streets. Discover new corners, restaurants, bars, or cafés.

Just enjoy yourself and the charm of the city. 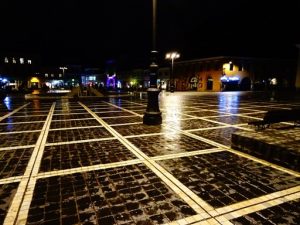 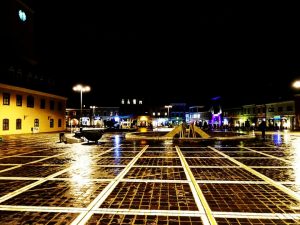 Feel the magic yourself and get your room in Brasov here*!

You want to read more stories and get travel inspiration straight to your Inbox? No problem! Just sign up for your weekly doses of Dream and Wanderland!

Do not forget to drop your thoughts and comments down below in the comment section. I love to hear what you think about Romania! Would you go there? Have you been there? Let me know if you like visiting Brasov!