9 Awesome Things To Do In Herne Bay, Kent, England

It’s been quite a while since I spent some time in England. Especially some time outside of London. In 2018, I left London to explore another part of the country when I spent a weekend in Plymouth, Devon. I told you, it’s been a while. But now it was just the time. My dear friend David, whom I met several years ago in Milwaukee, Wisconsin, had the chance to buy a house near the coast, and I wanted to visit him there. I’ve been dreaming of living by the sea myself; this is the closest to fulfilling a dream for now. It’s the main reason I went to Herne Bay, as this is where he lives now! I haven’t heard about it before, but I promise you that you will always want to come back when you’ve been there once. So let me tell you about nine awesome things to do in Herne Bay, Kent.

*There is a pretty good chance that this post contains affiliate links. We may receive a small commission (for which we are deeply grateful) at no extra cost to you by clicking one of them. See our Privacy Policy for complete details.

FREEBIE – The ultimate travel checklist to never forget anything when you plan your next trip!
Best Accommodations* – Check out my favorite accommodations around the world!
GetYourGuide*– Find exclusive and unique sightseeing tours all over the world!
Best Free Travel Apps – Find some useful apps for your travels! 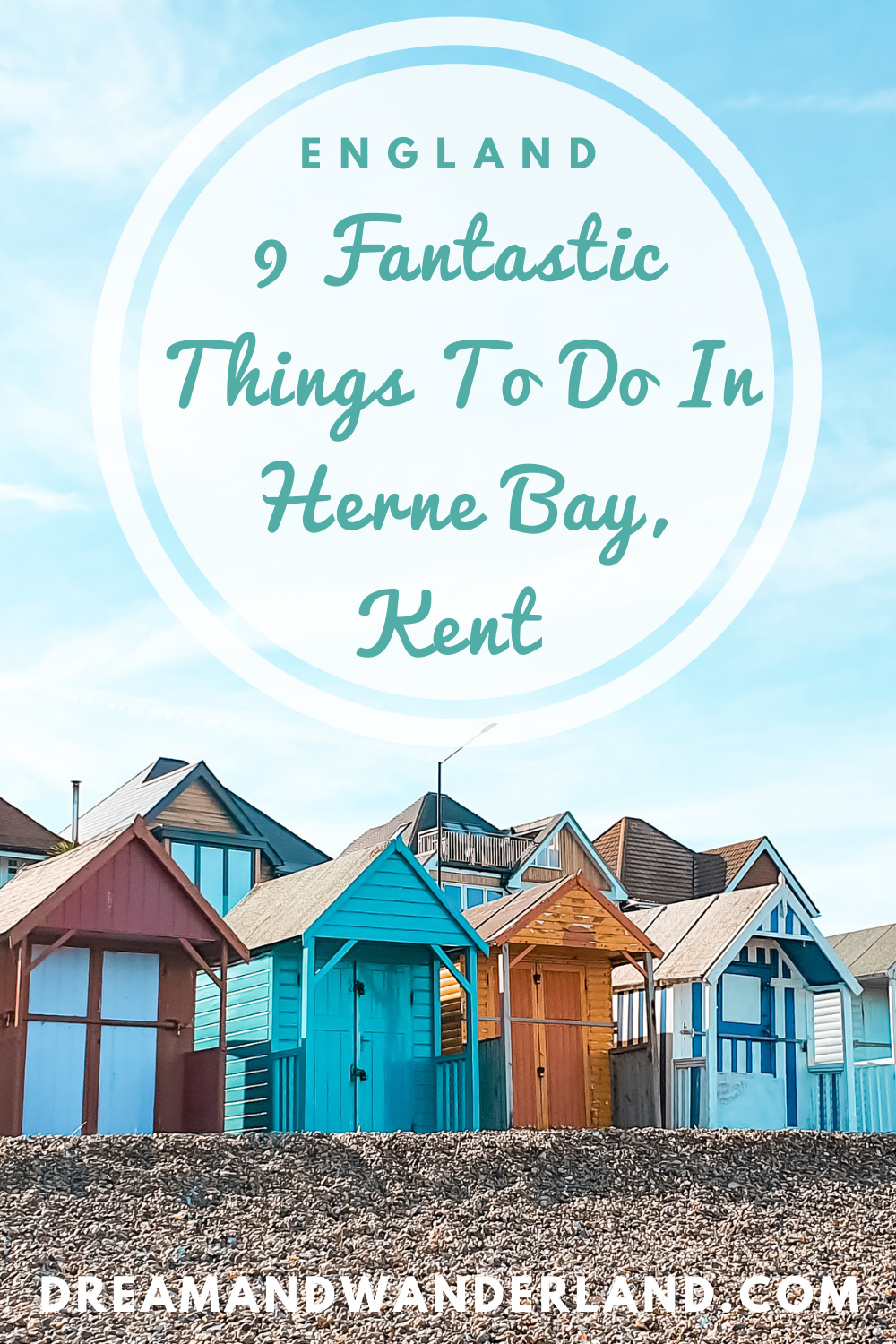 How To Get To Herne Bay, Kent

Herne Bay* is a charming coastal town in the County of Kent, South East England. It’s close enough to London to be the perfect match to spend a day out of town. Or choose to stay a bit longer and explore the neighboring Whitstable city or other nearby destinations. There are two ways to get there by train or by car.

The quickest and easiest way to get to Herne Bay from London is by train, whether from Kings Cross/ St Pancras International or London Victoria station. These are direct connections and take about one and a half hours.

Arrived at Herne Bay train station is only a 10 to 15-minute walk to the High Street or the beach.

If you prefer driving into the town, there are multiple car parks with similar prices. If you stay for the day, I’d recommend William Street Car Park as it is pretty central and open between 9 a.m. and 6 p.m. daily and charges £1.40 per hour.

A perfect match for a day trip from #London, or staying a couple of days and exploring #HerneBay, a charming #seaside town in #Kent, #England . #Travel #thingstodo @HelloHerneBay #HelloHerneBay @VisitCanterbury #visitcanterbury… Click To Tweet

Things To Do In Herne Bay, Kent

Herne Bay is a charming little sea town with colorful and cute beach huts, gaudy arcades, fish & chip shops, and lots of walking opportunities. Just the perfect place for spending a day at the sea, no matter if you’re traveling solo, as I do, or with the entire family. Herne Bay has offers for each age.

Below you’ll find a list of all you can do in Herne Bay.

MORE ADVENTURES FROM DREAM AND WANDERLAND  Best Things To Do In Brighton, East Sussex, England

When you come to the beach, you might first notice Herne Bay Pier. Here you can find the Retail Village, little white huts where you can find everything from arts, and crafts, vintage clothing, souvenirs, and other beach accessories. And when you get thirsty or hungry, no worries, you’ll find everything at the end of the Pier; local ales, food, and snacks. Grab an ice cream or a drink, relax in the seating area, and watch the seaside landscape or the old-fashioned fairground horses.

Check out their website for entertainment events like live gigs, music festivals, and theatre performances. Especially when you like to stay overnight, it’s worth checking what’s up next. 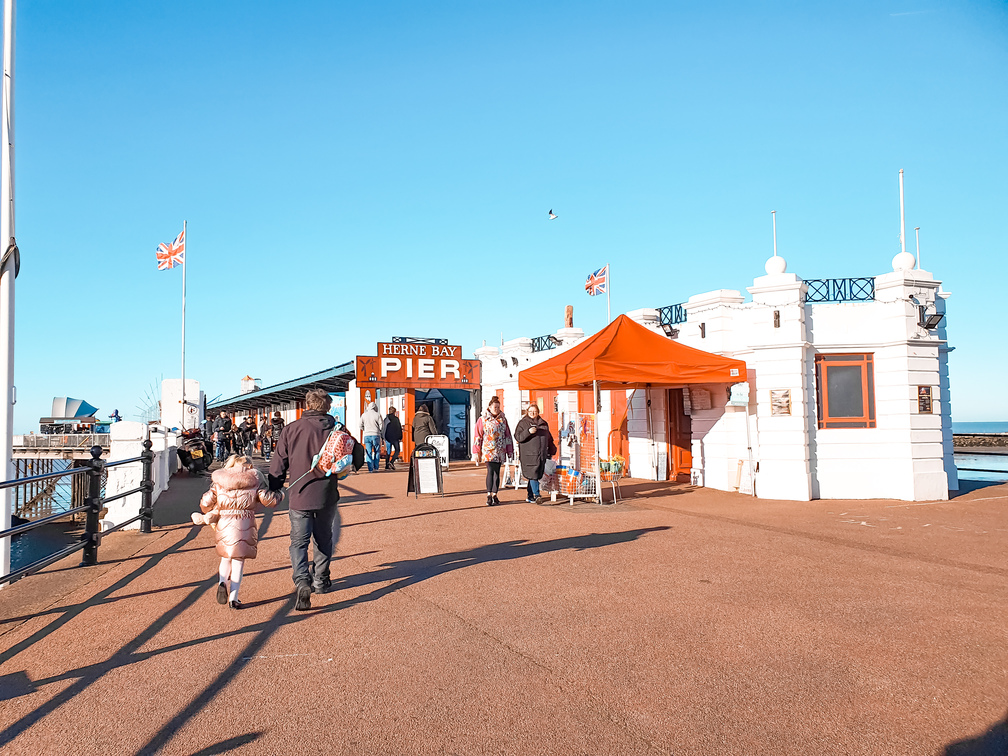 2. Walk Alongside The Beach

My absolute favorite thing to do in Herne Bay was walking up and down alongside the beach. On one side, you have a long row of colorful beach huts. Some of them you can also rent for the day and spend your day right there.

Then you have the Pier itself, and on the other side, you can walk on the promenade, passing Neptune’s Arm, the Clocktower, and Kings Hall. You can walk about an hour and more, away from the busy city and towards the ruins of Reculver that you can see in the far distance.

And below, you’ll find a couple of fantastic trails to either walk or cycle from, involving the area of Herne Bay, the scenic coastline, and the Reculver Ruins. You can download a map with directions and information on the links below. You can even walk alongside the coast to Whitstable or back when you spend the day in Whitstable instead.

This easy walk follows the Viking Coastal Trail and goes from Minnis Bay in Birchington-on-Sea to Reculver.

This trail starts in Swalecliff and leads you to the Reculver ruins. It’s mainly a cycling route. If you don’t like to walk or cycle the entire trail, start in Herne Bay. It halves the distance, making it 3m / 4.9 km, so a bit over an hour’s walk from the town to the ruins. (with all the stops for taking photos of the picturesque landscape, plan more than an hour. I tried it, and after an hour, I still was half an hour away from the ruins 😜) 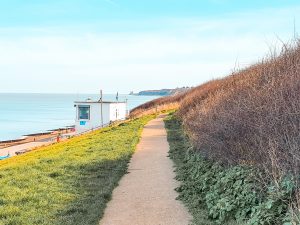 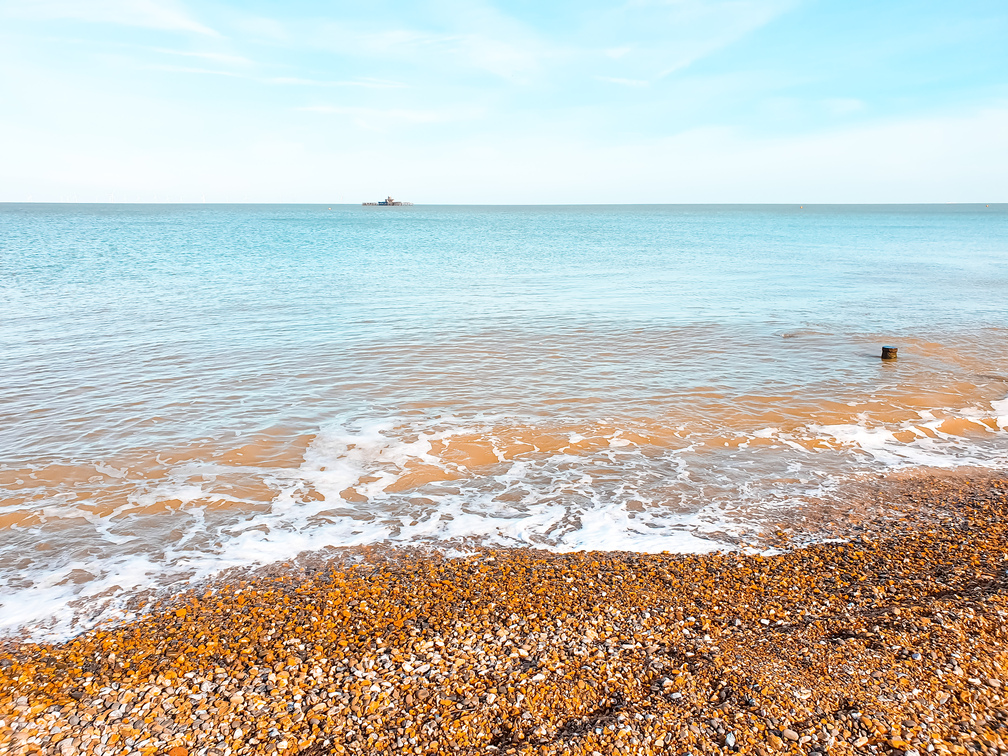 Neptune’s Arm is not a tourist attraction. It was initially built in the 1990s to prevent flooding in the most vulnerable parts of the town. However, it’s open to the public and on good days to walk on this concrete offshore breakwater. A viewing platform at the very end of the breakwater provides even more extraordinary views of the Pier and the town.

4. Dive Into History At Reculver Ruins

If you fancy some history, then the ruins of Reculver and the Roman Fort are the right thing for you.

This English Heritage historical site sits defiantly on the coastline and is visible from miles around. Starting as a Roman Fort, it was abandoned and later used as an Anglo-Saxon Monastery. While the rest of the structure is in ruins and coastal erosion took its toll, the two towers stand proudly overlooking the pebbled beach.

The remains are free to visit, and just behind them, you’ll find a pub and car park just a stone’s throw away. If you want to see without the drive, you can take a guided tour by paddleboard or follow one of the trails. 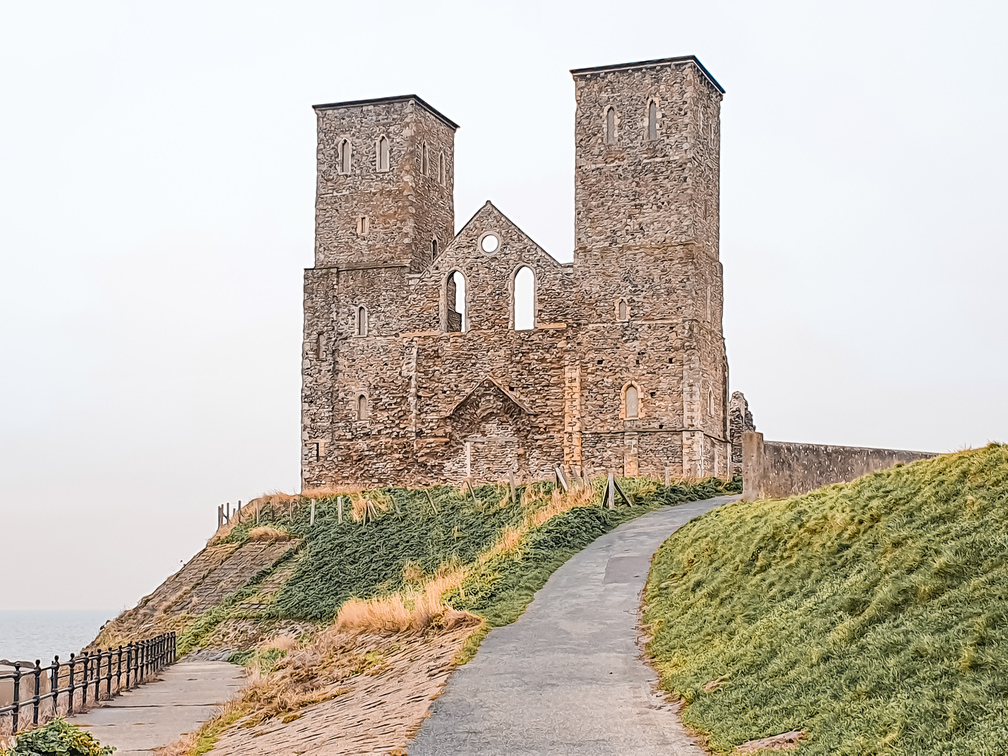 Herne Bay Paddle Co. is the go-to company when looking for some hours out on the sea. You can hire paddleboards and kayaks for £15 per hour to discover Herne Bay by yourself, take a class, or go on a guided tour of the coastline. Hire a paddleboard and take it for a sunset session! What a perfect ending to a summer day.

Guided tours can take you to the neighboring seaside town of Whitstable, the ruins of Reculver Cathedrale, or the old pierhead you can see in the far distance.

Visit #HerneBay, a charming #seaside town in #Kent, #England. A perfect fit for a day trip from #London or staying a couple of days and exploring the area. #Travel #thingstodo @HelloHerneBay #HelloHerneBay @VisitCanterbury… Click To Tweet

6. Drink and Eat Your Way Through Herne Bay

Featured in the Guardian as one of the top 10 restaurants and pop-ups to visit on the Kent Coast, the Bay Leaf Coffee House offers street food with a Sri Lankan twist. They serve lunch, delicious hot chocolate, and cake.

Of course, what be a day out at the beach without Fish and Chips? The restaurant that my friend David brought me is called Fish Inn Two, which was indeed one of the best Fish and Chips I had in a very long time.

And for all the cat lovers out there, no worries, I hear you! The Cosy Cat Café was my favorite. Fourteen rescue cats live there, and they serve cakes and lunch, and you can even book an afternoon tea session. Make sure to book a table in advance as they usually are pretty booked out.

I have one for you if you fancy a proper pub. The Pub is my favorite. And yes, that is the name “The Pub.” Nice people, music from an actual record player, and delicious beer!

Herne Bay has some local businesses, antique stores, vintage boutiques, and charity shops. Perfect for adding some shopping to your day.

If you love vintage, head to Alamode Vintage, filled with vintage clothing and accessories, and check out their Instagram for £2 flash sales so you can bag a bargain!

The Emporium is a treasure trove of antiques, collectibles, and retro furniture and can be found on High Street.

On the second Sunday of the month, traders and guest producers offer local products and crafts at the farmers’ and craft markets at Wimereux Square.

And don’t forget the Retail Village, the tiny white huts lined along the left-hand side of the Pier.

Pin me for later! 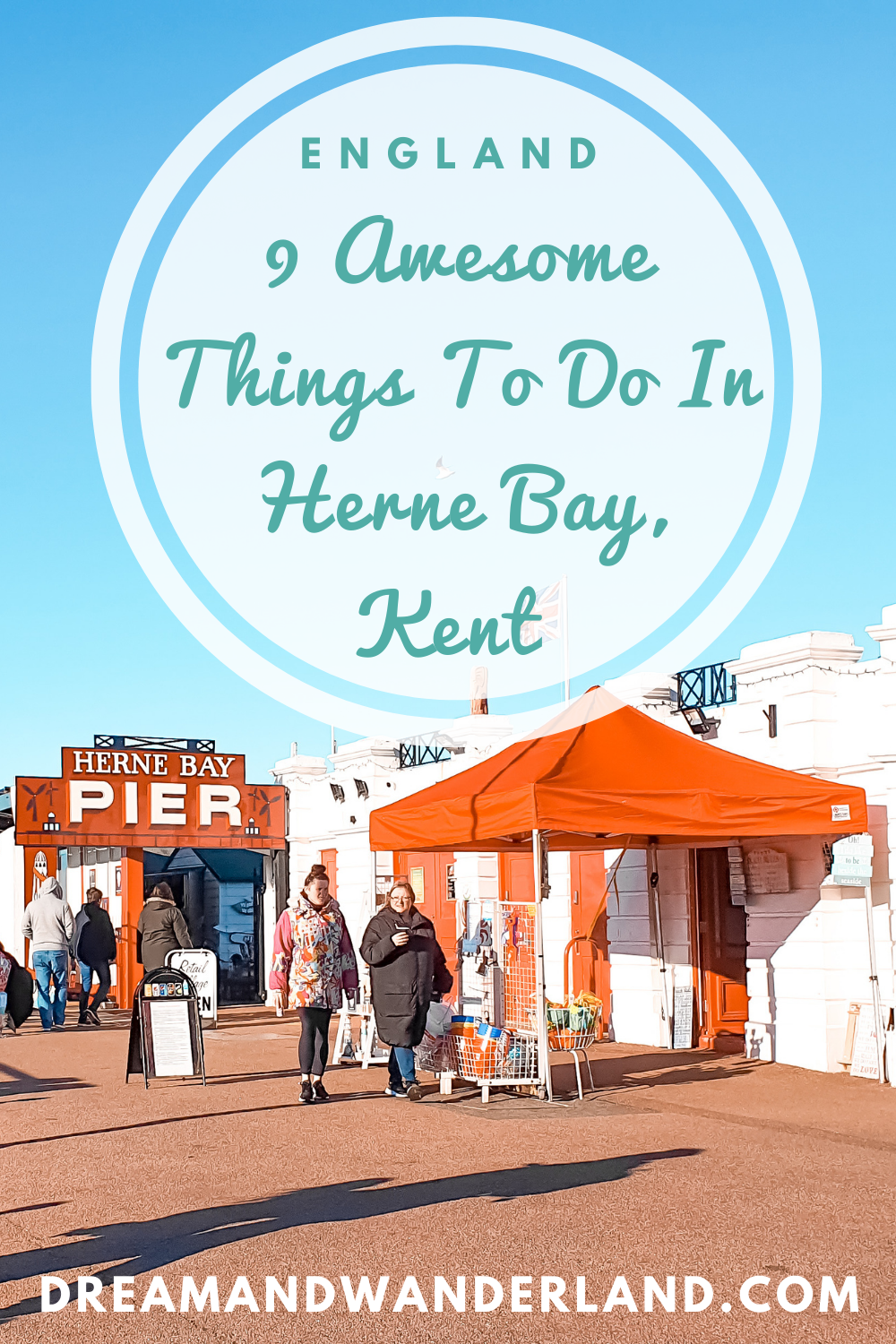 The She Rose by Jo Oakley gallery is more than just a shop; but is an ever-evolving space full of artwork. Not only from the artist herself but also from other talented artists from the area. Check out the event page for upcoming events and workshops for children and adults, like candle-making, drawing classes, or seasonal craft markets.

If you’d like to spend more time than just a day in the area, many other towns are nearby to visit. You can quickly go to Canterbury and Whitstable using the Triangle bus service in less than an hour. And even the White Cliffs of Dover can be seen on a day trip. Other neighboring towns worth visiting are probably Rochester, Sandwich, Deal, Margate, and Ramsgate. All of them are great opportunities to explore Englands’ coastal area. 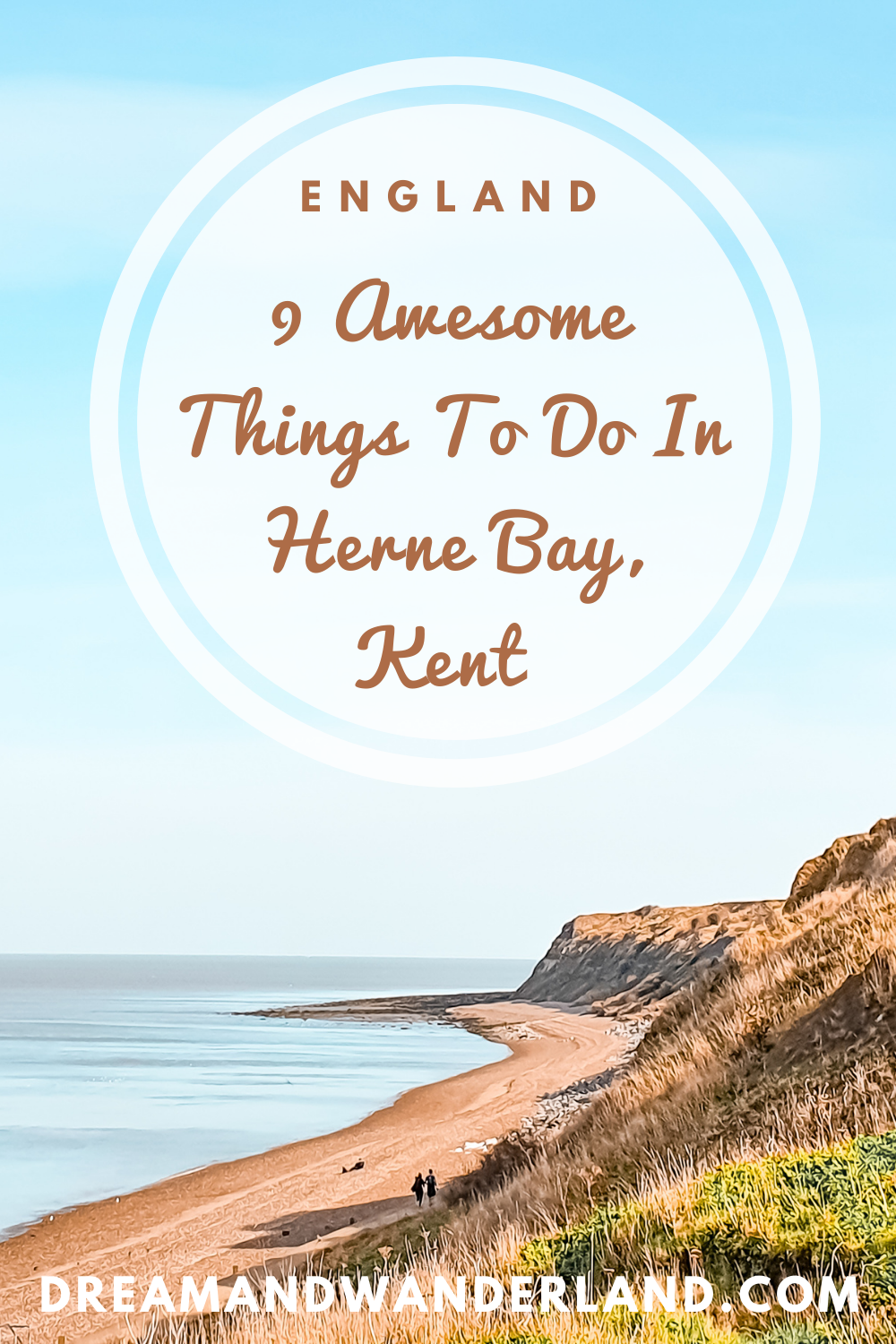 So what do you think? Is Herne Bay a travel option for you, too? I can recommend spending there at least a day. I stayed for five days and fell in love with the town and the area. It’s so calm and peaceful. Not too touristy, but loads of things to do. And just perfect for a day trip when you like to get out of London for a while. Let me know in the comments if you’d put Herne Bay on your list!

19 thoughts on “9 Awesome Things To Do In Herne Bay, Kent, England”