From Pensacola to Tampa in two days.

Driving alongside the coast of the Gulf of Mexico and discover places like Mexico Beach, the home of world’s famous Oysters Apalachicola or the beautiful nature of the Wakulla Springs State Park. We made it!!

It is day 10 and halftime already. In the last three years, I mostly was on the road at least for three weeks. So this two and a half week seems to be over so fast.  However, there is still a good week to go, and our journey continues. Today and tomorrow we will make our way from Pensacola to Tampa. Means, all the way back to East, but this time alongside the coast on one of Florida´s scenic highways.

But first things first: Breakfast!!! To start the day and especially a long driving day as this one is supposed to be, a proper breakfast is helpful. Following a recommendation we went to “My Favorite Things,” a restaurant, diner, bistro and “things”-shop where we sat outside and enjoyed a tasty breakfast. If you are around; you can find it on 2813 E Cervantes St, Pensacola, FL 32503. Let´s go and enjoy!

Then we made our way alongside the ocean. Unfortunately, we haven´t seen any sea as there were some trees and homes between us and the waterfront. So happier we were when we arrived in Seaside*. That is a perfect place to stop by for wandering and shop around. Going to the beach. Although this is a popular location for US people to spent their vacation the beach isn´t as crowded as in other places, and you won´t find any large hotel block-buildings as at other sites. But if you are looking for a calm and lonely beach, this isn´t the place for you. 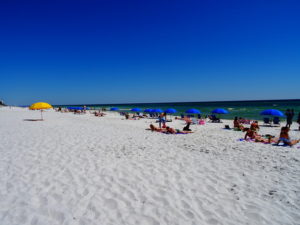 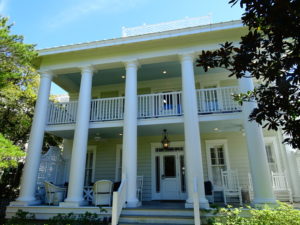 A little fun fact aside: 1998 the movie “The Truman Show” was recorded here.

Both of us haven´t been here so far but were interested in what´s going on in Panama City. The answer is everything and nothing. A lot of things could be done here as shopping, drinking, having fun and stuff like that. It reminded me of Daytona Beach or Beni Dorm. Panama City* is full of young and loud people, shops and gaming halls. Everything you need for having a vacation with a lot of partying. Our image of a holiday is a bit different. We want to relax and don´t get bothered by too many people. Notably, at the beach, I need a little space around me and my towel. If the beach is that packed with people laying next to each other with less than a meter between them and myself, I won´t feel comfortable at all and relaxing is not possible for me. We tried to have a little walk and wanted to go to the Pier. But even this wasn´t possible, at least, not for free. And to be honest, we didn´t want to pay for anything, which doesn´t look very nice. Therefore, we hurried to go back to the car and drove on.

Precisely the opposite of Panama City we found a few miles later when we drove through Mexico Beach. A sweet and calm town with a gorgeous waterfront. The beach and the Gulf of Mexico were possible to watch from out of the car. Some sympathetic beach houses alongside the road. Before we left, we could witness a beach wedding. How romantic is this! Finally, we arrived at my favorite place for eating Oysters. World famous Apalachicola Oysters. Some people would say these are the best in the world. I have to admit, that I am not sure which Oysters I like most, the one from Apalachicola or the one from Maine. But this would be another story!

So here we are, in Apalachicola and what we were going to do? Right, eating Oysters. Well, I went for eating Oysters. Alex had a delicious Crabcake, which she really liked and so far! Quote: “One of the best crab cakes I´ve ever had in my entire life.” Nothing else to add, I would say. The same I can say about the Oysters I had. We went to the Boss Oyster and had a beautiful view of the Apalachicola River. I ordered an Oyster sampler plate with a dozen Oysters of varied sizes. From small to almost as big as my hand is. Ok. Maybe a little bit extreme, but damn, were they huge! After an enjoyable evening with delicious Oysters and a good night beer and live music in one of Apalachicola’s Pubs, we went to St. George Island the next morning. A short pause to start the day with the ocean and hey! A lighthouse! Have I mentioned that I love beams? If not, yes, I do like them. It is just a short drive from Apalachicola and when you are around it is worth to stop here and have a look at the beach, put your feet into the ocean and be thankful that you can see and feel all this. We stopped one more time when we were back on the road, somewhere alongside the Gulf of Mexico. There was almost nothing around but a lonesome appearing part of a sort of beach somewhere in the nowhere. That´s what I love on this route, that you could stop wherever you want and find something beautiful. 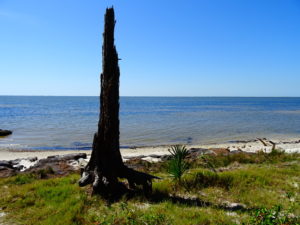 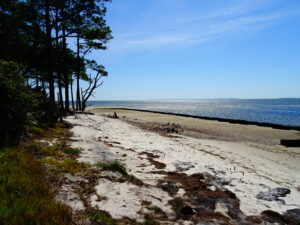 So we drove by and away from the water and back to the inner area of the state, heading to the Wakulla Spring State Park. Not the worst idea we had these days! The Wakulla Springs State Park is located halfway between Tallahassee and the coast of the Gulf of Mexico. This state park is the home of one of the largest and deepest freshwater springs in the world, and you will find a wide range of wildlife lives here like turtles, alligators, manatees, deer, and birds.

Although it was a more or less long way round, it was worth it to visit. The fresh water allows swimming what a lot of people did. We instead took the chance to do one of the riverboat tours. We just arrived in time for the one o´clock tour. And it was awesome. For 8$ only we had a 45-minute two-miles long loop-tour on the Wakulla River and saw alligators and turtles laying in the sun and a lot of different birds. Unfortunately, we haven´t seen manatees, although they usually found close to the spring itself. Back on the road on our way to Tampa. Still, a long way to go and yet haven´t seen a manatee. We decided to give it another try at the Manatee Springs State Park because we wanted to see at least one manatee. I mean, the name says all, we expected to see some. Some of the people we met told us that there is one, but once again, it wasn´t there anymore when we arrived. Well, next chance at the next stop, maybe! Next stop was Crystal River*, which is known for an excellent place to swim with manatees. We thought we would see some here definitely but in the end, we were just too tired and it was too late for still “chasing” them. Instead, we stop at the Crackers, a restaurant with a pretty view onto the marina and had dinner before we headed to Tampa, finally. Grilled Oysters and Zucchini Fries for me. The grilled Oysters were the replacement for the raw once because these were out already. It was good to give it a try but to be honest, I prefer the fresh once or similarly, which I had the night before in Apalachicola.

Eventually, we made it to Tampa, checked in the hotel and went to bed.

10 thoughts on “Florida – From Pensacola To Tampa In Two Days”