Today is my first complete day in Cartagena and the second stop in Colombia. The first city I visited during my South America trip was Medellín. An awesome city with some many interesting things to do. Unfortunately, I did not have so much time to explore the city, as I attended a conference for digital nomads. Because of that, I could not see all the things which were on my wish list. A good reason to put Medellín on my list of “places where I want to go back.” Oh yes, I have such a list and places like Philadelphia, Seattle, Eleuthera Islands, Montauk, New Orleans, and Ireland, etc. are already on this list. Now, Medellín made it to this list as well.

Breakfast On A Rooftop

However, this is Cartagena´s time. I kicked off the day with breakfast. As my hotel, the Akel House* does not have an own breakfast location; it collaborates with the hotel on the other side of the streets. They serve breakfast on their rooftop, which is pretty cool, as you can overlook the roofs of the city. It was such an impressive experience to sit there every morning and enjoy this view. I had a weird feeling of being privileged to have the opportunity to travel to all those incredible places.

After I finished breakfast, I went to San Diego, which is part of the old town of Cartagena.

Therefore, San Diego was in the past the neighborhood where the people lived, who had not enough money to live in Centro. However, I soon had the feeling that this would be my favorite part of the town.

I entered the old town during the famous clock tower. It was also in former times the only entrance to these neighborhoods and is still today the starting point of the most tours through the old town of Cartagena. Then, I turned right, heading to San Diego. 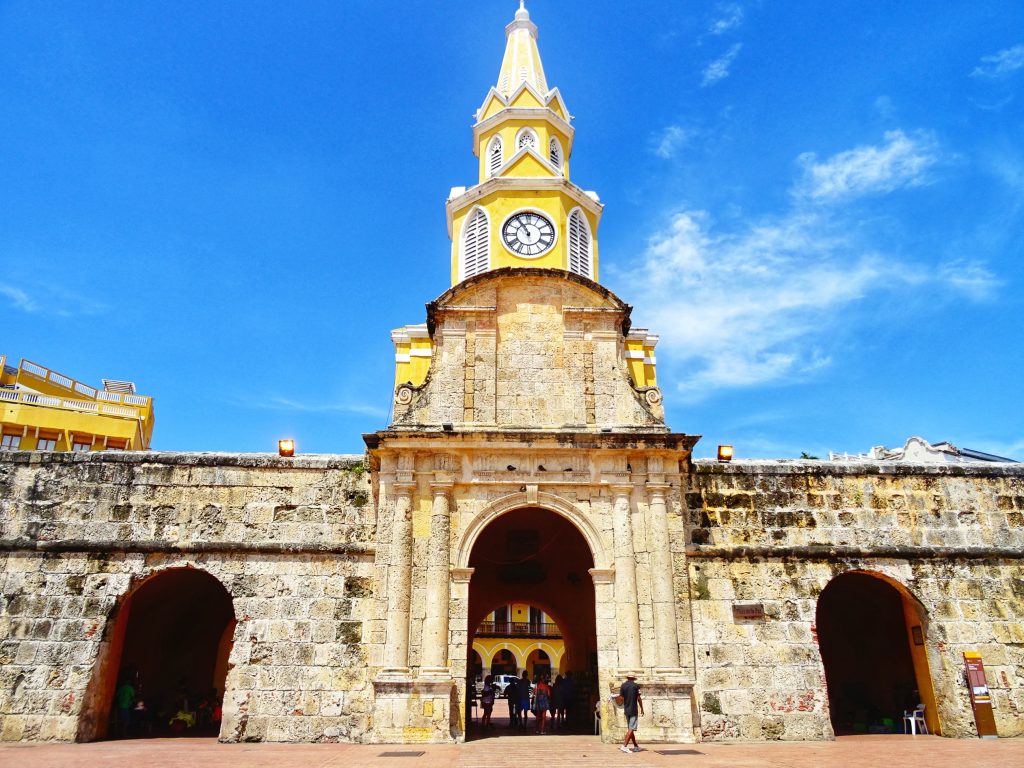 Not So Relaxing Sides Of Cartagena´s Old Town

The first thought I had, while walking through the gates of the clock tower was “OMG – it might be similar to Cancun, Mexico.” You ask me why? The one thing I did not like about Cancun was the number of people who want to force you to buy anything. Every 30 seconds, if not shorter, someone asked you, if you need a taxi, a massage, or a tour. I was afraid that it would be the same here.

And I was right. Already, around noon, I was so annoyed and stressed out because of saying “No, gracias” that I was happy to go back to my room, calm down, and having a siesta. Every few meters, someone tries to sell a sunhat, sunglasses, tours, or water! It is not a bad idea at all, because the sun is intense and without enough water, your body will make trouble soon, but damn, I am too sensitive for that. I am a person, who loves to walk through a city in silence, at least, when I am on the road all by myself. The only thing I want to do is to wander, to wonder, and being stunned by the beauty and uniqueness of such places. I do not want to be asked all couple of seconds if I want to buy anything. If I need something, I will ask them!

Another issue I had with the old town were the cars, which tried to push through the small lanes and all the people who walked everywhere. I crowded place full of people, and honking cars is a nightmare for me! I hope that the old town is better prepared for pedestrians, but it is not! Fortunately, not all the streets were that busy, and I was happy that I could have some calmer moments in between.

Puh, I am sorry for complaining! On the other side, if you have a similar personality or needs, you are officially warned now. Do you want to visit Cartagena yourself one day? Prepare yourself and plan some breaks, where you can get the silence you need to relax and destress. For all the other, who do not have any issues with crowded and loud places, with too many cars, and people, go straight to the pictures of the colorful buildings, below!

The Colors Of San Diego

And here it is why I liked San Diego the most! The colors of the houses! I had the impression that this neighborhood had the most colorful houses. Because I loved these colors, which, by the way, was one of the reasons why I wanted to visit Cartagena*, it is my favorite part of the city.

I strolled through the streets, and lanes walked up and down and could have stopped every few steps taking pictures of the houses, and the facades of the buildings. 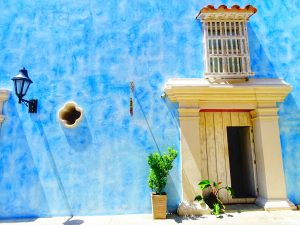 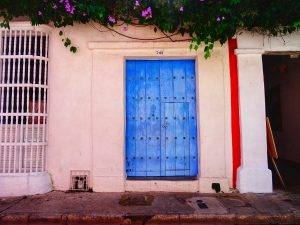 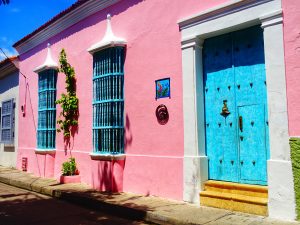 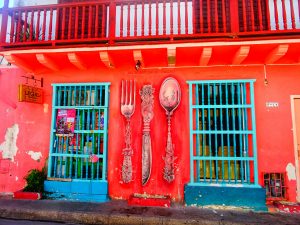 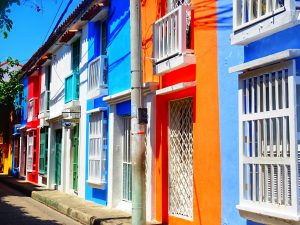 Time For A Siesta

I guess, it was two or three hours only, but around noon, I felt like I had seen every single street in San Diego. At 4 p.m. I had reserved a spot for a walking tour through Centro. As there were still a few hours to go, and I had plenty of time! Due to the heat and the humidity, I was ready for a siesta. Either, I was not hungry at all, that is why I went back to my hotel. I had a shower (once again, and it should not be the last one for today), and had a short nap. The climate here is indeed a challenge for me and my body. I have not expected that it would be that humid.

The good the about the heat was that I did not get too hungry all the time. In contrary, with all the water, lemonades, and other drinks to balance out my hydrating level I did not feel hungry at all. No hunger, no food, means that I spent less money on expensive restaurants and meals. Not too bad, I guess!

Just in time, for my afternoon walking tour, I was ready and set to head to the meeting point. There are a few options for a free walking tour out there. I went with Free Tour Cartagena, the guys with the blue shirts! A two-hour narrated walking tour of the old town, mainly Centro. 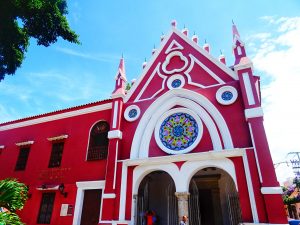 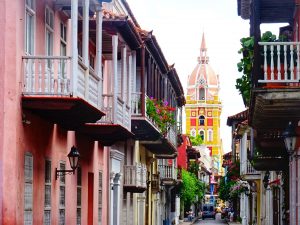 After meeting up at Plaza Santa Teresa, we walked to all important places, squares, and sights in Centro and the guide told us a lot of exciting details about the history of Cartagena*. The attacks of pirates, the French, the English, and the French again, slavery, and the Spanish Inquisition. He also told us some facts about the life of the people, the differences of the three neighborhoods in the old town, and many more. 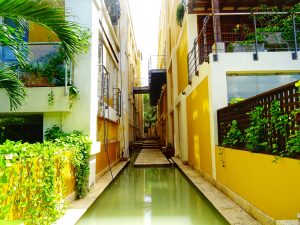 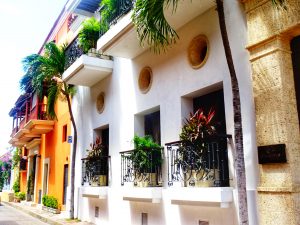 It was a fabulous tour, and it is available in English, and Spanish, two times per day (10 a.m. and 4 p.m.). But again, prepare yourself with enough water, maybe buy a sunhat or lemonade from one of the street vendors, as it is hot even in morning and afternoon hours. One of the attendees had a breakdown due to dehydration and could not finish the tour. So make your homework and drink as much as you can. You probably will not need a toilet as you will sweat out everything anyway.

After two hours of walking and listening, we finished our tour near the city wall. The sun was already about to set, and it was a perfect opportunity to walk on the wall while the sun went down. It was a magical moment, which I would not like to have missed.

As soon as it got dark, I went back to the hotel. But first, I stopped by the Arepa guys from yesterday. I ate one more of these delicious Arepas before I went to bed. It was not late, but I was that exhausted that I did not want to do anything else today. No nightlife for me today. I was happy to rest and excited about a new day in Cartagena.