A day trip to Bergen op Zoom? What do you think about it? What? Never heard about it?

No worries, me neither! At least, not before a friend of mine told me about a friend of her, who were in Bergen op Zoom the other day and that it should be a charming little town and perfect for a day out if you don´t want to stay at home but can´t travel too far!

So, my friend and I took the car and drove about two hours (from my hometown Düsseldorf) into the Netherlands and had a fantastic day in this beautiful town. 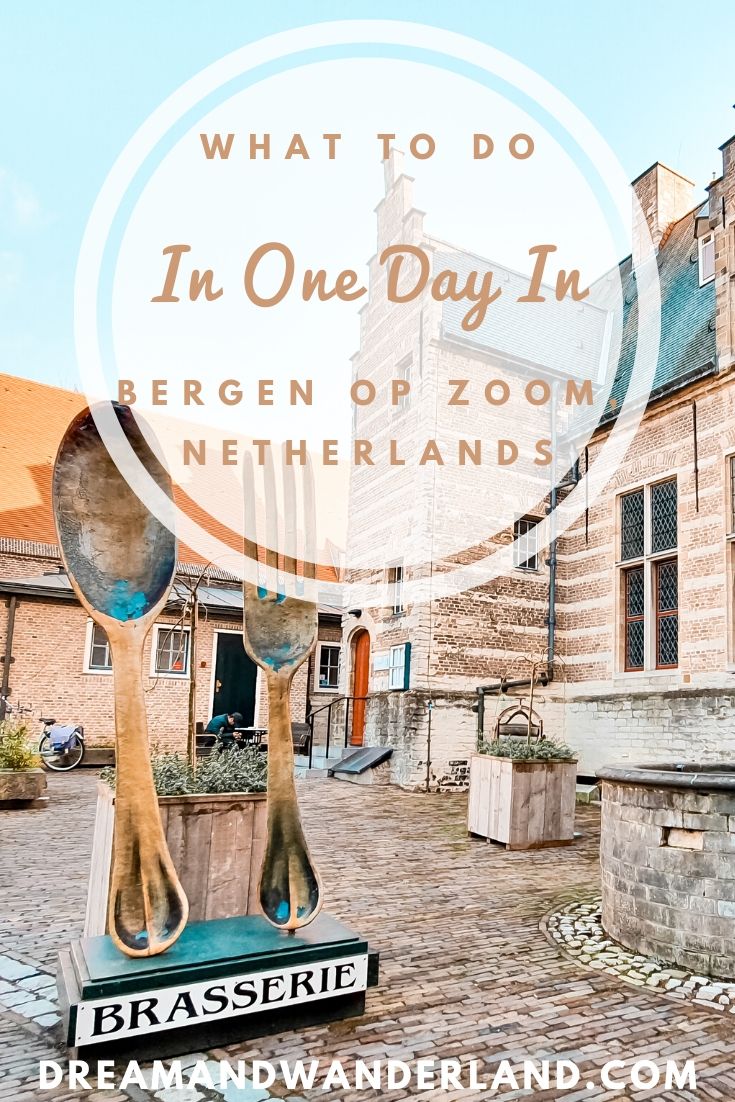 I didn´t know anything about the town except what my friend told me. A friend of hers visited Bergen op Zoom a few times already, and she loved it. Because of that, the next Saturday, I grabbed my best friend, and we drove over to the Netherlands.

Bergen op Zoom is a beautiful and historic city, with about 66 000 inhabitants, a lot of monumental buildings, plenty of shopping opportunities, and many chances to fuel your body and soul with delicious food and drinks.

MORE ADVENTURES FROM DREAM AND WANDERLAND  A Summer Day In Amsterdam

Where Is Bergen Op Zoom

The city is located in the Dutch province of North-Brabant and on the border of the neighboring province Zeeland.

The closest cities are Rotterdam and Antwerp, but also from Amsterdam; it´s only a short drive. However, as the Netherlands is a pretty small country, everything around is pretty close. Even from the western parts of Germany, like Düsseldorf, it´s only a two hours drive.

Also, Bergen op Zoom lies on the hills of the Brabantse Wal, which is surrounded by the river Schelde and the sea. With loads of historic estates and natural reserves, this area is an ideal spot for hiking enthusiasts and nature lovers.

How To Get To Bergen Op Zoom

The easiest way to visit Bergen op Zoom is probably going by car. Whether with your own or a rental car like I did, as I don´t own a car myself. Don´t worry about parking. There are huge garages near the city center at Grote Markt and De Parade. Just ask your GPS, and it will lead you to it. The parking fees for the entire day are less than 10 € and quite affordable.

You can also go by train or bus. The central bus station is close to the main train station, and both are in less than 1-kilometer walking distance from Grote Markt, which might be your starting point for a walking tour anyways.

When To visit Bergen Op Zoom

You can make a day trip to Bergen op Zoom at any time in the year. But to get the full experience you might prefer visiting the city in the high season, which is from April to October. In the off-season, most shops and other attractions are closed or limited opening times, and you can explore only a few of them.

Things To Do In Bergen Op Zoom

Besides a little bit of shopping, hopping from one café to the other and fuel your body with delicious food in one of the many restaurants, the one thing you should do in this beautiful little town is strolling through the streets and wonder about the cute but historic buildings. The following attractions and things to do might be too much for only one day trip. But who says you can visit only once? Therefore, read on and find this as a travel guide to Bergen op Zoom and things to do in one day in this Dutch city in Noord- Brabant.

The best starting point is the Grote Markt from where you can head in any direction. It´s the central square situated in the middle of the old town and surrounded by Saint Gertrude´s Church, the Town Hall, Hotel De Draak, Theater De Maagd, and many cafés and restaurants. On a sunny summer day, you can soak in the vibrant and lively atmosphere while hanging around and drink a coffee or a cold refreshing drink. 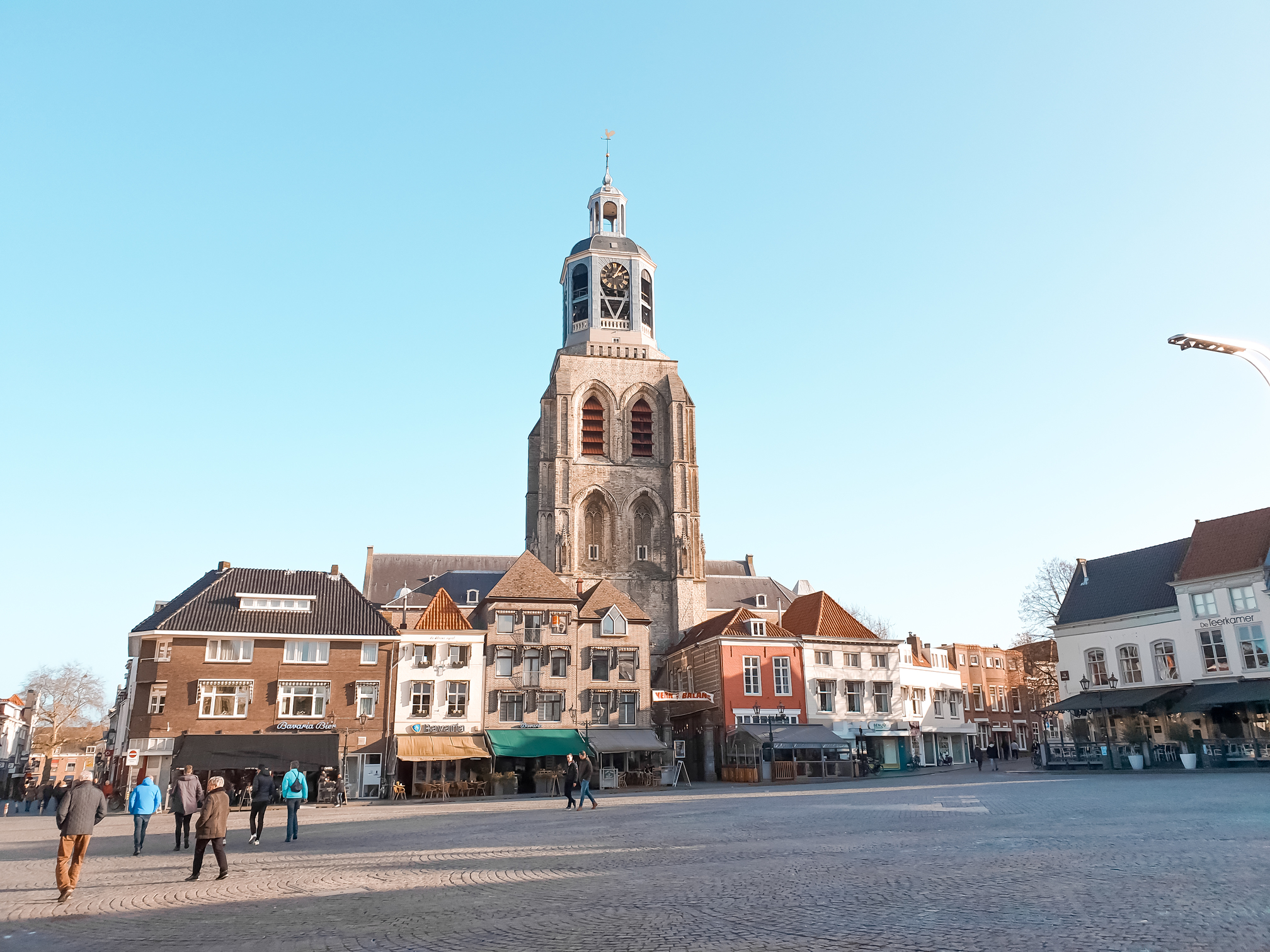 In 1219, the church was mentioned in the speech of a priest. But the first official reference was in 1370. However, an old legend tells about Saint Gertrud, who was the abbess of the abbey in Nivelles and founded the church in 654.

The oldest part of the church is the tower. The church itself may look like it´s from former times and historical, but it´s not. Several times it was burnt down and built up again, destroyed, and once again restored.

The highlight, except the beautiful interior, is the tower, also called “Pepperbox” due to its look. For a small obolus of 2 €, you can climb up the 183 steps of the tower, and you´ll be rewarded with a stunning 360 degrees view of the city. 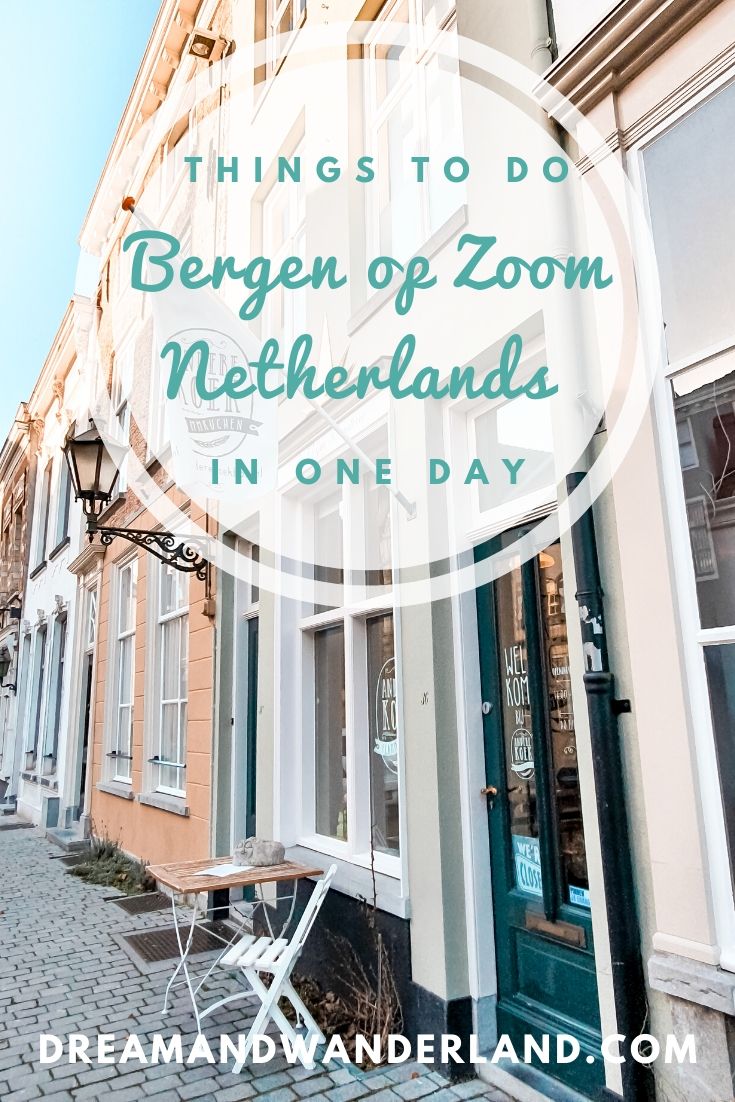 The Stadhuis is a building complex of three different houses. It´s still used today, and a tour of the inside is pretty worth it.

The Theater De Maagd sits in a former Roman Catholic church. Nowadays, it´s an intimate theater with about 650 seats. 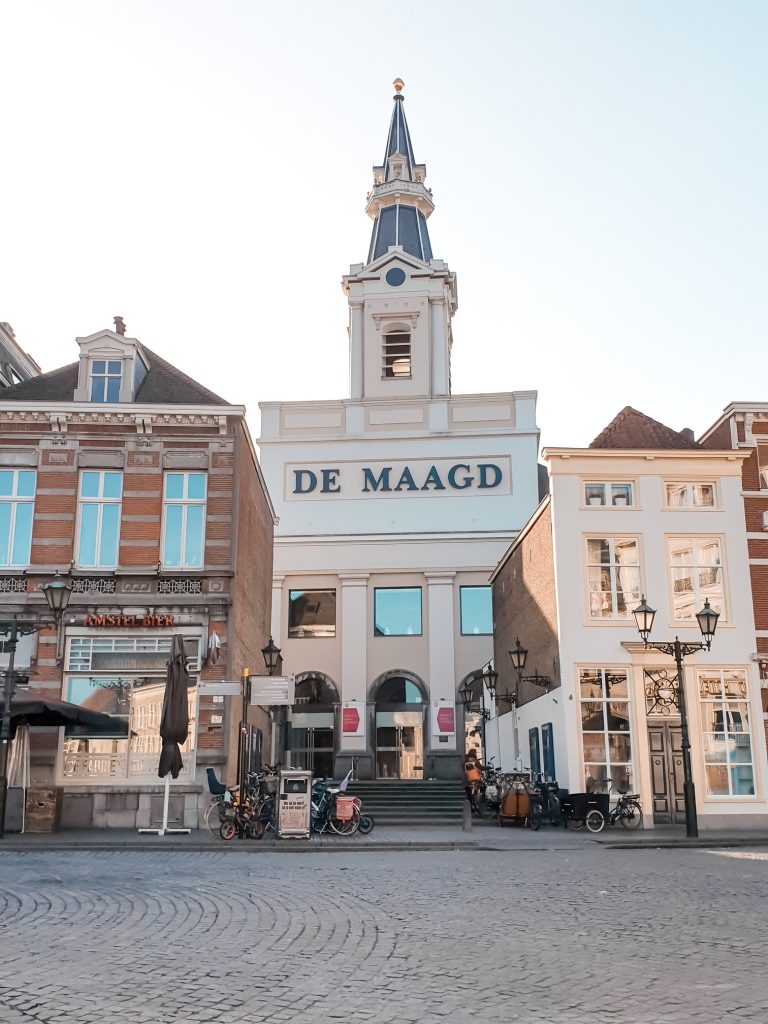 Some people say that hotel De Draak is the oldest one in the Netherlands. It has been offering accommodation to visitors for over 600 years now. But the building itself is even older as it dates back to at least the 13th century.

Lievevrouwepoort (or Gevangenpoort) is the oldest monument in town and was part of the fortifications around the city that was built in 1335. Over time, it became a prison. Today, it´s the only gate that is leftover from the city walls.

It´s also home to Escape the Gate, where you can see how fast you can escape this medieval city gate and prison. 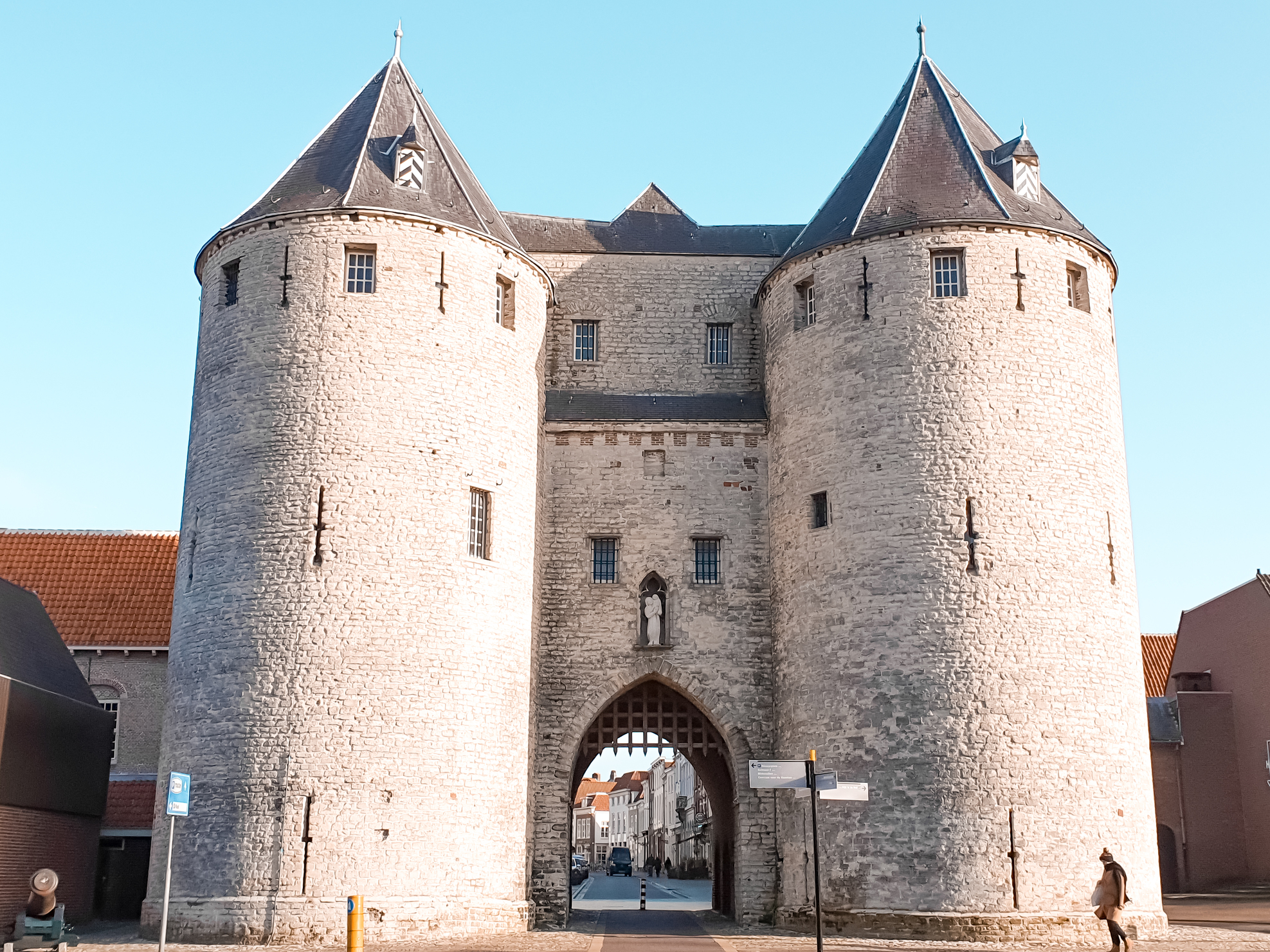 The Markiezenhof is the oldest city palace of the Netherlands and was built in the 15th century. The building dates back to the late medieval period. It was the home of the Marquise of Bergen op Zoom. Today, it hosts a museum that shows the history of the town and region and a large permanent exhibition on the history of fairs.

Ravelijin op den Zoom is the last fortification and surrounded the city until the end of the 19th century. It was built in 1702 by Menno van Coehoorn. The underground tunnels, cannon cellars, arched roofs, casemates, a vantage point, and a floating bridge can be visited. Check the tourist information at Markiezenhof. 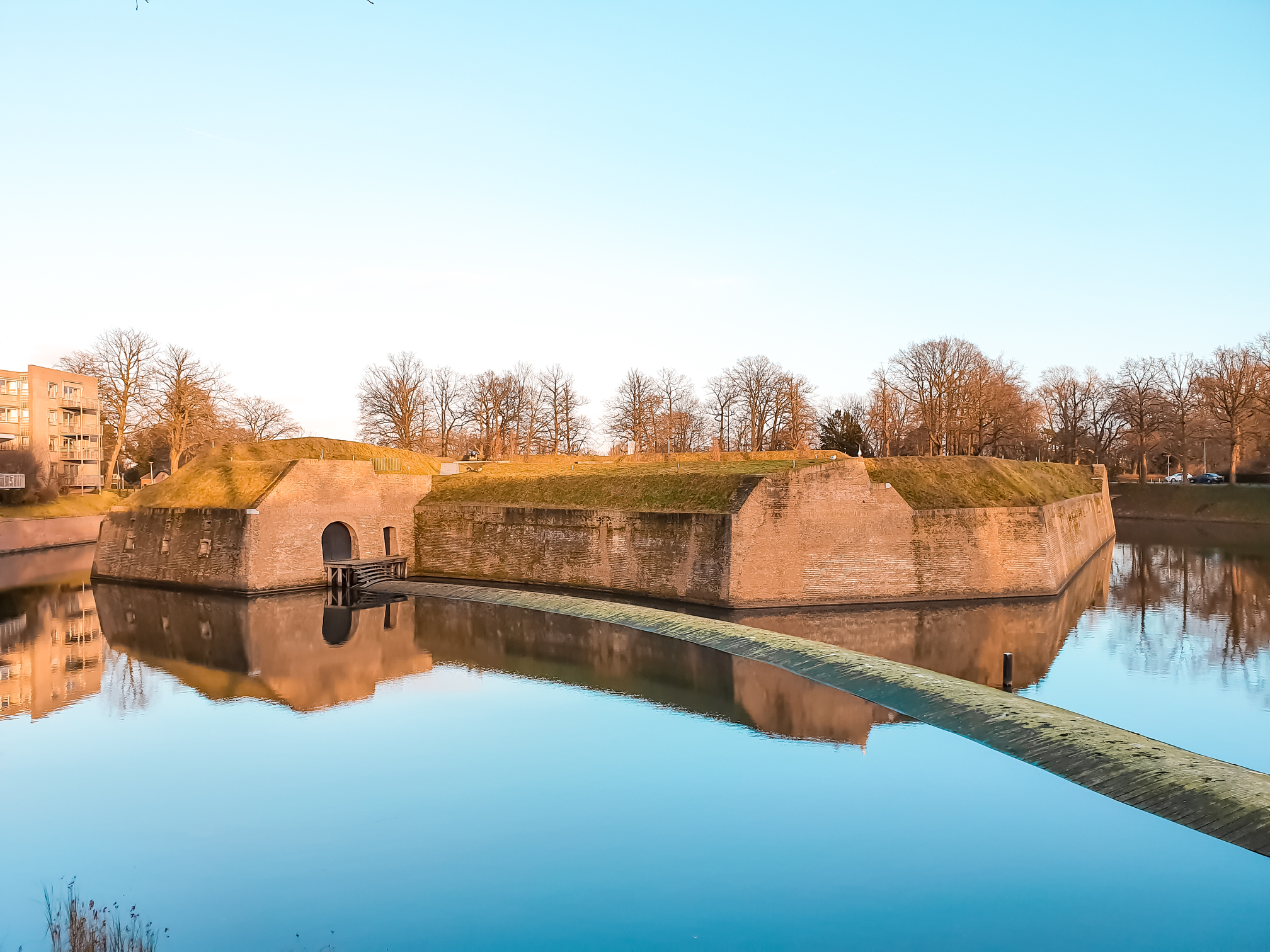 The Grebbe is a restored waterway and sewage system that was installed in the 13th century. It connects the historic town and the surrounded waters, including the harbor. You can visit and explore the part between the Prison Gate and Markiezenhof on a guided tour.

Book a tour for visiting the Grebbe right here! Or visit the tourist information in the city palace for more details!

The former harbor district consists of a lot of beautiful and historic buildings. A lot of those houses were potteries in the early days. A small watergate from 1951 connects the open and the filled up part of the harbor. From the Prison Gate to the harbor district, it´s about a 10-minute walk.

MORE ADVENTURES FROM DREAM AND WANDERLAND  Brussels: Five Not So Good Reasons For Visiting!

Exploring the old town is a must-do while visiting Bergen op Zoom for a day. Even if you can´t make it to all the other attractions, this one you can´t miss. And it´s an easy one! Just leave the Grote Markt and stroll the streets. You´ll see colorful houses, shops, and many more! Wandering the Engelsestraat or Lievevrouwestraat will amaze and stun you! 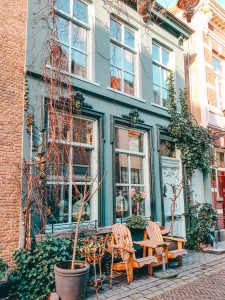 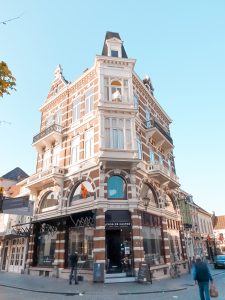 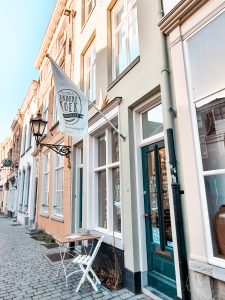 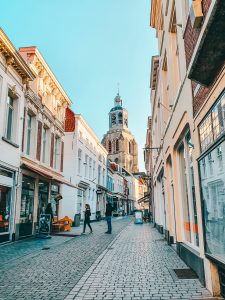 Only a few minutes from the historic city center, whether by bike or by car, you´ll find the beach! Yes, Bergen op Zoom has even a beach! Isn´t that the perfect destination for hanging out a day or an entire weekend? Ok, for a day trip it might be too much to visit both the beach and the city center! But no one says you can´t visit more than once!

Visit Bergen op Zoom for a day! Add the beach and the Brabant region for an entire weekend! Click To Tweet

Another area outside the city is the Brabantse Wal. Located south of Bergen op Zoom, it´s a hilly area that separates the clay area of Zeeland and the sandy soils of Brabant. It is home to a wide range of plants and bird species. The highlights of this area are the Kraaijenberg and the Mattemburgh estate. The estate offers a beautiful English and French garden, a pond, coach houses, an English Tea House, and an Orangery.

My newest favorite restaurant, café, and coffee dealer in the Netherlands is Brownies & Downies. Why do I like it? Well, not only is the food delicious, with incredibly tasty and crazy choices. It is also is an inclusive training center for people with intellectual disabilities. They learn how to work in a restaurant and eventually actually work and run them. 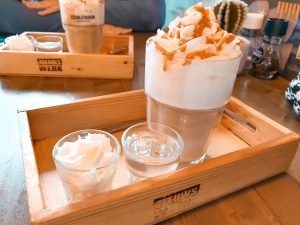 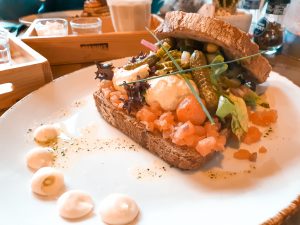 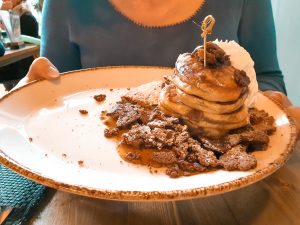 When you´re fancy an excellent and local market and have time going to Bergen Op Zoom during the week, you should spend some time in the market. It takes place every Thursday from 9 a.m. – 4 p.m. In the center of the city. You can find it around Wouwsestraat, Van Der Rijtstraat, Stationsstraat, and on the Korenbeursplein (square). 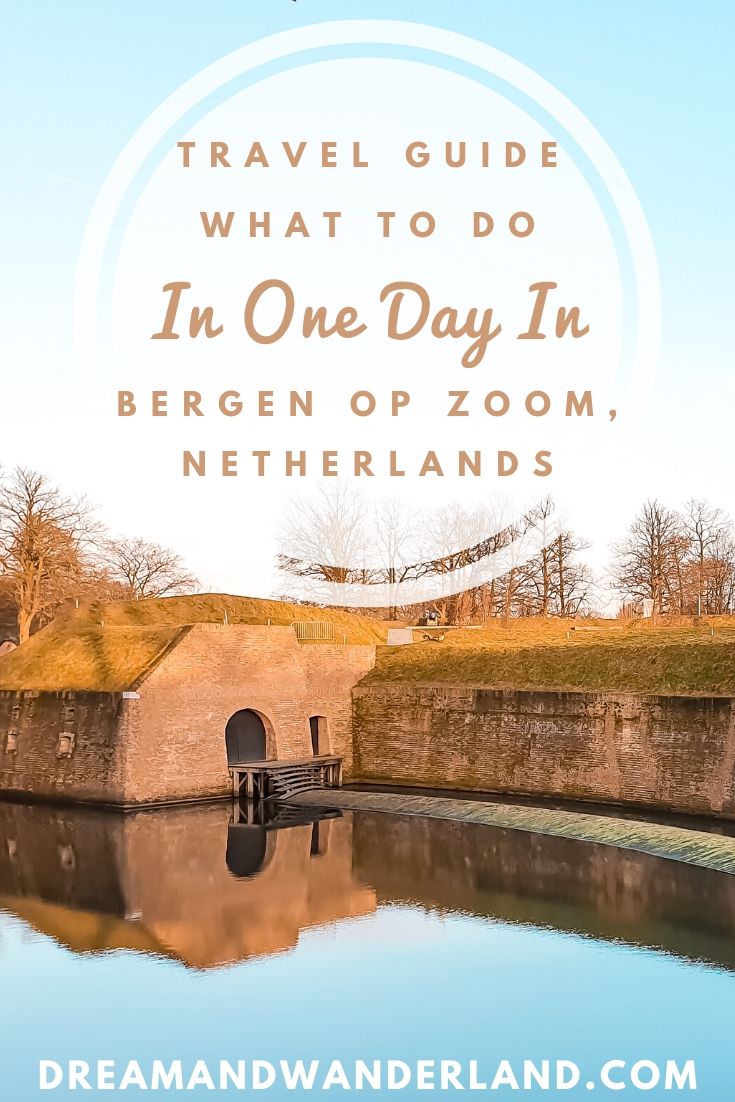 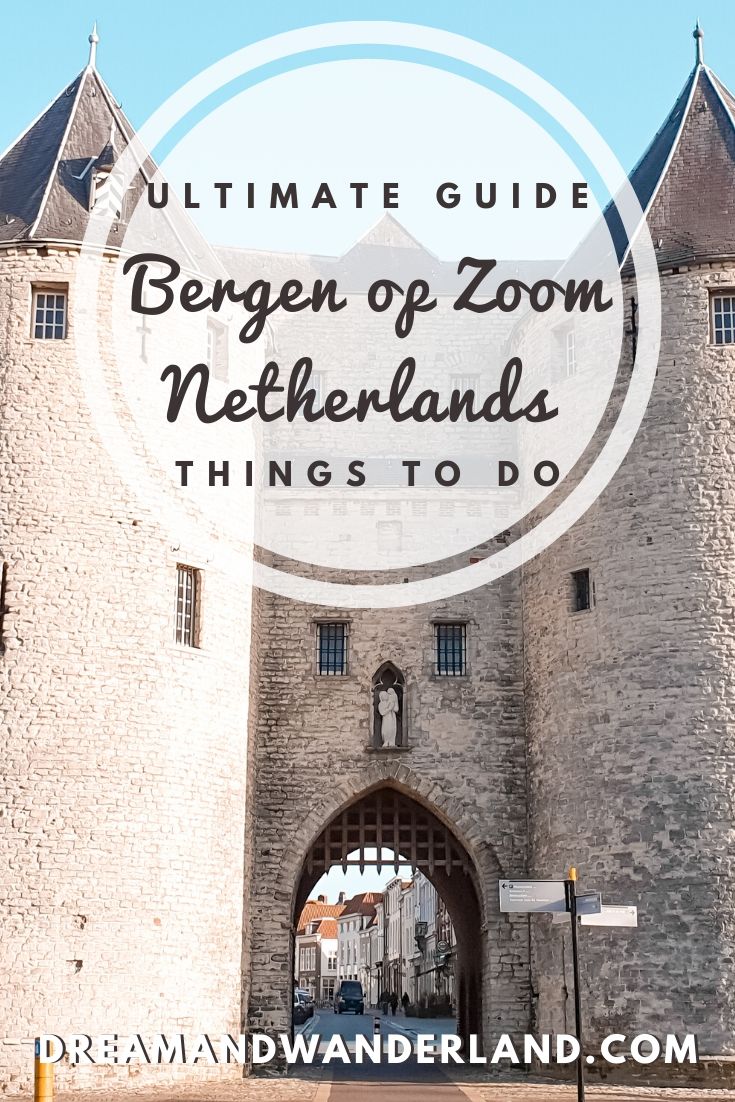 Well, what do you think now? Would you like to visit Bergen op Zoom for a day trip? Or even longer?

In my case, it won´t be the last time that I traveled to Bergen op Zoom. There is still so much to do and explore! Notably, the Grebbe, and the beach, I would love to see!